Dollar trading generally lower today as markets await Fed’s highly anticipated rate cut. Though, the greenback is just the second weakest. New Zealand Dollar is the worst performing one for today so far on deteriorating business confidence. Swiss Franc is the third weakest as markets turned mixed. Australian Dollar is lifted by slightly higher CPI reading as well as China manufacturing PMI. Yet, there is no turnaround in the Aussie yet. Canadian Dollar follows as the second strongest, then Sterling. The Pound is paring some losses but no-deal Brexit fear will continue to weigh.

Technically, Dollar pairs will be the major focuses today. In particular, EUR/USD is consolidating above 1.1107 key low. USD/CHF is held below 0.9951 resistance. USD/JPY also stays below 108.99 resistance. EUR/USD’s support has to be taken out firmly to confirm Dollar buying, better accompanies by break of resistances in USD/CHF and USD/JPY.

Dollar softens ahead Fed’s rate cut, is it the beginning of a cycle

Dollar softens mildly in Asian session as markets are preparing for FOMC rate decision in the upcoming US session. Fed fund futures continue to price in 100% chance of easing (-25bps cut at 78.1%, -50bps cut at 21.9%). There is little chance for Fed to upset such firm market expectations even though some policy makers may be reluctant to do so.

A -25bps cut to 2.00-2.25% should very well be priced in. The questions are whether it’s a start of an easing cycle, or just a one-off response to risks. The voting will reflect the split inside the committee. Chair Jerome Powell’s press conference is even more important in framing the cut.

During a visit to a farm in Wales yesterday, UK Prime Minister Boris Johnson appeared to have no interest in meeting EU, unless they shift their position on Brexit. He said “if they can’t compromise, if they really can’t do it, then clearly we have to get ready for a no-deal exit, and I think we’ll do it …. it’s up to the EU, it’s their call.”

His spokesman also noted that, “the prime minister made clear that the UK will be leaving the EU on October 31, no matter what,” referring to Johnson’s call with Irish Prime minister Leo Varadkar. And, “the government will approach any negotiations which take place with determination and energy and in a spirit of friendship, and that his clear preference is to leave the EU with a deal, but it must be one that abolishes the backstop”.

On the other hand, the Irish government said “the Taoiseach explained that the EU was united in its view that the Withdrawal Agreement could not be reopened.”

Released from UK, Gfk consumer confidence improved to -11 in July, up from -13 and beat expectation of -13. BRC shop price index dropped -0.1% yoy in July.

And, “annual growth in the CPI continues to be subdued due to falls in a number of administered prices. Through the year, utility prices have fallen 0.2 per cent and child care has fallen 7.9 per cent following the introduction of the Child Care Subsidy package in July 2018.”

ANZ noted: “The outlook for the economy is deteriorating. Despite generally good commodity prices and interest rates at record lows, the headwinds of a global slowdown and credit and cost constraints appear to be winning out. With the inflation outlook not consistent with the target midpoint we expect two more OCR cuts this year, helping the economy to find its feet once more.”

China PMI manufacturing rose to 49.7, foundation for stabilization still needs to be consolidated

Analyst Zhang Liqun noted that: “Economic downturn is slowing down…. activities have been restored…. there are signs of recovery in production and operation activities, indicating that the effect of macroeconomic policy counter-cyclical adjustment has begun to appear.”

However, he also warned that ” downward pressure on the economy is still not to be underestimated. And, the foundation for stabilization still needs to be consolidated.

Also released, official PMI Non-Manufacturing Index dropped to 53.7, down from 54.2 and missed expectation of 54.0.

EUR/USD is staying in consolidation above 1.1101 temporary low and intraday bias remains neutral first. Another recovery could be seen. But outlook will remain bearish as long as 1.1282 resistance holds. On the downside, sustained break of 1.1107 low will resume larger down trend from 1.2555. Though, firm break of 1.1282 will bring stronger rise to 1.1412 resistance. 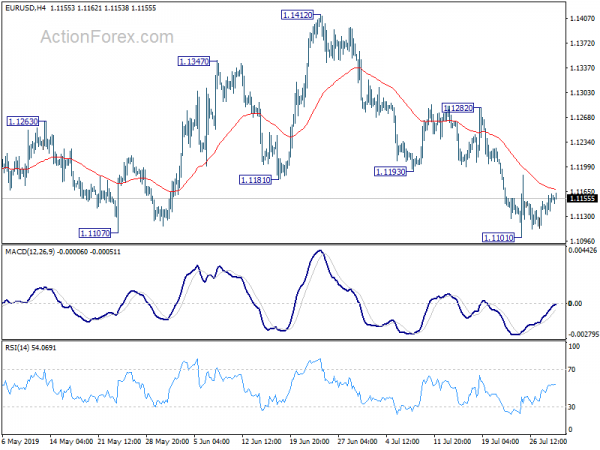 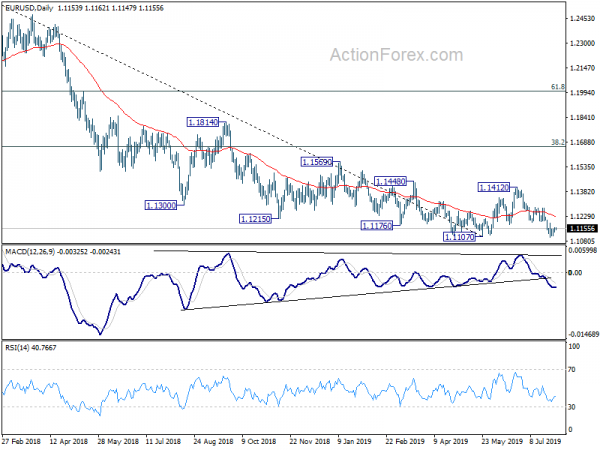