Market sentiments stabilized with recoveries seen in European stock markets, while US futures also point to a solid rebound. The China’s Yuan also pares back some of yesterday’s steep losses on rumors that a PBoC official reassured foreign companies that the currency won’t continue to weaken significantly. Though, the bond markets shrug off the stabilization in sentiments with German 10-year yield hitting new record low of -0.541.

Technically, Dollar is picking up some strength in early US session. USD/CAD might have a take on 1.3266 temporary top and break will resume recent rebound. EUR/USD’s recovery lost momentum ahead of 1.1282 resistance and focus is back on 1.1133 minor support. GBP/USD and AUD/USD could be watched today for breaking 1.2079 and 0.6758 temporary lows to resume recent decline.

PBoC: China has not and will not use exchange rate to deal with trade disputes

China’s PBoC said today that the country “has not used and will not use the exchange rate as a tool to deal with trade disputes”. And it “advised” the US to “rein in its horse before the precipice, and be aware of its errors, and turn back from the wrong path”.

Further, PBoC warned that US designation of China as currency manipulator would ratchet up currency tensions and “prevent a global economic and trade recovery.”

In a strongly-worded editorial, the People’s Daily, China’s official newspaper, condemned that the US was “deliberately destroying international order”. The piece was published hours after US decision to designate China as currency manipulator, even though such issue was not mentioned. The editorial said the responsibility of big countries is to provide the world with stability and certainty. However, “some people in the United States do just the opposite”.

USD/CNH edged higher to 7.1399 earlier today but pulled back from there. It’s currently trading at 7.07, below yesterday’s close. There is sign that PBoC is looking at stem the free fall in Yuan. The general consensus remains that China wouldn’t want steep fall in Yuan exchange rate, which would trigger disastrous capital outflow and decline in asset prices. Instead, the Chinese government would likely prefer controlled depreciation.

San Francisco Fed President Mary Daly said she is focused on U.S. and China trade tensions as a factor, regarding the next move in monetary policy. He said that trade tension is “amplified” and she’s focusing her attention” on these headwinds. She described that “sometimes the blowing slows down and sometimes it picks up, and now we’re in a picked-up position”.

Though, she also noted that aggressive rate cuts are not warranted for now, without evidence of a stronger economic downturn. And she didn’t see the economy heading into a recession.

EU: No-deal Brexit is not our preferred option, but current deal is best possible

A European Commission spokesperson said today that the bloc was still hoping to avoid no-deal Brexit. But EU is prepared for such an outcome. She noted that “a no-deal scenario is not our preferred option,” but reiterated that the current withdrawal agreement was the “best possible” one. And, “our no-deal preparedness protects the EU 27 and the interests in the case of a no-deal Brexit,”

She also noted that the Commission does remain available over the coming weeks should the United Kingdom wish to hold talks and clarify its position in more detail, whether by phone or in person.”

Earlier, The Guardian reported that no-deal Brexit is now UK government’s central scenario. An unnamed EU official was quoted saying the UK has ““no intention to negotiate, which would require a plan”.

Australian Dollar recovers mildly after RBA left cash rate unchanged at 1.00% as widely expected. The accompanying statement is a tweaked a bit further to the dovish side. The central bank noted that “it is likely to take longer than earlier expected for inflation to return to 2 per cent.” Also, “it is reasonable to expect that an extended period of low interest rates will be required in Australia”. But overall, the statement doesn’t alter expectations for one more rate cut this year, probably another in the first half of next year depending on development.

On the economy, RBA acknowledged that growth has been “lower than earlier expected” in first half. The central scenario is for growth to be at around 2.50% over 2019 and 2.75 over 2020. Consumption remains the main domestic uncertainty. Unemployment rate is expected to “decline over the next couple of years to around 5 percent”. And RBA reiterated that “Australian economy can sustain lower rates of unemployment and underemployment.” Inflation is projected to stay a “a little under” 2% over 2020 and a little above 2% over 2021.

Intraday bias in USD/JPY remains neutral for consolidation above 105.52 temporary low. Upside of recovery should be limited below 109.31 resistance to bring fall resumption. On the downside, break of 105.52 will target 104.69 low next. 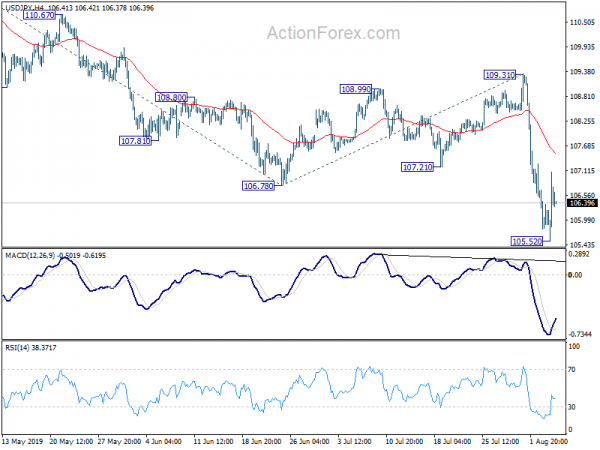