Markets in Consolidation, But Risk Aversion Ready to Come Back Soon

Directions in the forex markets are not very clear for now as consolidations continued. There were lots of reasons for a move but traders remained generally cautious. The US is stepping up its hardline rhetoric on China, and prompted some worries of RBA Governor. Italy is in political turmoil as the Prime Minister resigned. UK looks set in tight deadlock with EU regarding Irish backstop as Brexit date approaches. Yet, there is no follow through movements after the news.

Technically, risk aversion looks ready to come any time though. EUR/JPY continues to press 117.51 temporary low. USD/JPY and GBP/JPY have been clearly in consolidations since hitting 105.04 and 125.64 respectively. EUR/CHF attempted to recover but it’s limited comfortably below 1.0922 minor resistance. USD/CHF’s recovery continued to lose upside momentum and focus is back on 0.9762 minor support. Sit tight.

US President Donald Trump continued his hardline stance on China with strongly worded comments. He told reporters in the White House that “Somebody had to take China on… This is something that had to be done. The only difference is I am doing it.”

Trump repeated that “China has been ripping this country off for 25 years”. He added that whether his trade policy is “good or bad short term is irrelevant”, as “I am doing this whether this is good or bad.” Instead, “long term, it’s imperative somebody does this.”

There were growing concerns that trade war with China could trigger a possible US recessions. But Trump emphasized “we’re very far from a recession”. Though, he admitted that “we really need a Fed rate cut” as there cannot be a large “disparity” between rates in the US and elsewhere in the developed world. “We have to at least keep up to an extent.”

In a Quora.com post, San Francisco Fed Mary Daly said the US is not headed towards a recessions right not. She saw “solid domestic momentum that points to a continued economic expansion:. Also, “the labor market is strong, consumer confidence is high, and consumer spending is healthy.”

But “considerable headwinds”, including global slowdown and trade uncertainties, contributed to fear that a “downturn is right around the corner”. Hence, she’s closely look at whether “fear of recession becomes a self-fulfilling prophecy”.

Daly added that recent rate cut was “appropriate recalibration” of policy in response to the headwinds. And, her support was “not because I see an impending downturn on the horizon.”

Italian President Sergio Mattarella will start his process to form a new coalition government, after Prime Minister Giuseppe Conte formally resigned yesterday. Mattarella is believed to be pushing for a quick decision by the 5-Star Movement and Democratic Party on whether they can work together.

Mattarella will start consultations with minor groups at 1400GMT today, followed by all main parties tomorrow and a conclusion with 5-STar at 1500GMT. Failing to form a new coalition, he would have to dissolve parliament, 3-1/2 years ahead of schedule, to allow for elections in late October or early November.

The turmoil League party chief Matteo Salvini declared on August 8 that his alliance with the 5-Star Movement was dead and called for elections. Yet, at the end of yesterday’s parliamentary debate the League withdrew the no-confidence vote in the government that it had tabled.

RBA Philip Lowe was reported saying in a private business event this week that trade war between US and China was the single biggest threat to the global economy. According to The Sydney Morning Herald and The Age, Lowe said “I do not have a clear idea of what strategy the US has. (Some in the US) say that it is time for Team West to muscle up against China and that is very worrying.”

In August RBA minutes released yesterday, it’s noted that “uncertainty around trade policy had already had a negative effect on investment in many economies”. And, Board “members observed that the escalation of the trade and technology disputes had increased the downside risks to the global growth outlook, although the central forecast was still for reasonable growth.”

Australian Prime Minister Scott Morrison, on the other hand, was rather calm on the situation. He said yesterday that “we’re going to have to get used to this for a while, this level of tension.” And, “we’ve just got to accommodate that, we’ve got to absorb it, we’ve got to see the opportunities in it, of which there are many.”

RBNZ Hawkesby: It would be better to do too much too early

RBNZ Assistant Governor Christian Hawkesby explained the decision of the surprised -50bps rate cut in speech today. He said “we judged that it would be better to do too much too early, than do too little too late”. The alternative approach of cutting by -25bps “risked inflation remaining stubbornly below target, with little room to lift inflation expectations later with conventional tools in the face of a downside shock.”

On the other hand, “a more decisive action now gave inflation the best chance to lift earlier, reducing the probability that unconventional tools would be needed in the response to any future adverse shock.”

Hawkesby also noted that neutral rate is currently in a “wide range centred on 3.25 percent, down from around 5 percent before the GFC”. And, “all else equal, a lower neutral rate implies that we need to set our Official Cash Rate lower to deliver the same amount of monetary stimulus to the economy.”

Australia Westpac leading indicator rose 0.1% mom in July. UK will release public sector net borrowing in European session. But Canadian CPI will be a major focus for today. US will release existing home sales. FOMC minutes would be watched for the debate regarding last month’s rate cut. That could provide some hints for the chance of another cut in September. Though, Fed Chair Jerome Powell’s Jackson Hole speech will likely be more important. 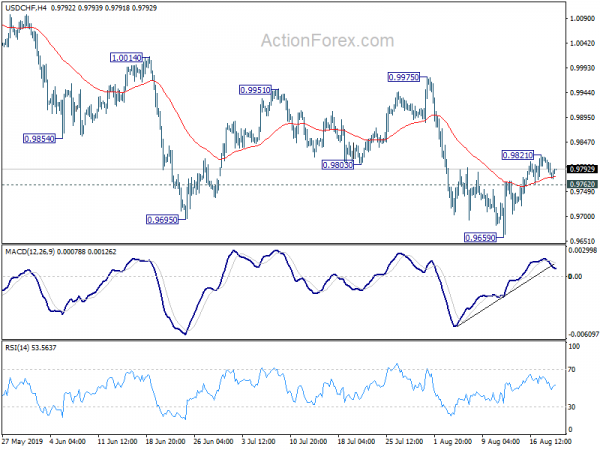 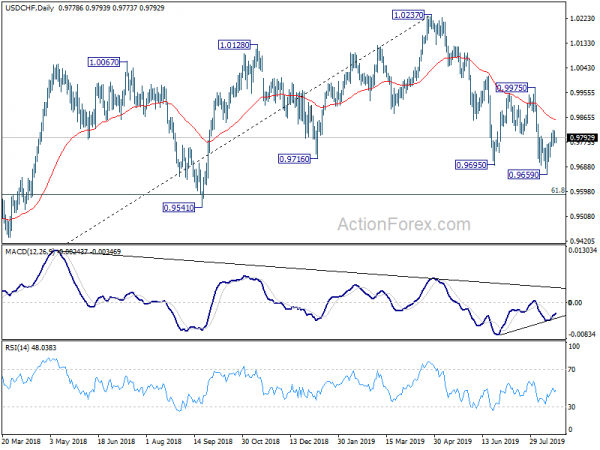