The markets are trading in mild risk averse mode ahead of quarter end. There are some worries of financial decoupling of US and China even though it’s just at very preliminary stage. But selloff is limited with support from improvements in Chinese PMIs. Yen is trading generally firmer. On the other hand, New Zealand Dollar is additionally pressured by its own poor business confidence data, followed by Australian as second weakest. Dollar is mixed for now, awaiting some important data in the week ahead.

US Treasury: Not contemplating blocking Chinese companies from listing at this time

The statement was in response to a Bloomberg report that White House economic adviser Larry Kudlow was leading deliberations regarding a potential “financial decoupling” of US and China. Options discussed included forced delisting of Chinese companies, imposition of investment in China by US government pension funds, and limits on value of Chinese companies in US managed indexes. However, it’s later said that the deliberations are at very early stage, without even a time line.

Separately, Reuters reported that Nasdaq is already cracking down on IPO s of small Chinese companies, by tightening restrictions and slowing down approvals. The new listing rules raised the average trading volume requirements for a stock. Additionally, Nasdaq could delay listing of a company that does not demonstrate a strong enough nexus to the US capital markets. While not being directly targeted, small Chinese IPOs have experienced longer waiting times and scrutiny.

China Caixin Manufacturing PMI improved to 51.4 in September, up from 50.4 and beat expectation of 50.2. That’s also the highest reading since February 2018, signalling a recovery in the sector. Markit noted there were stronger increases in output and total new orders. However, new export business continued to decline. Staffing levels remained broadly unchanged.

Zhengsheng Zhong, Director of Macroeconomic Analysis at CEBM Group said: “The recovery in China’s manufacturing industry in September benefited mainly from the potential growth of domestic demand. The trade conflicts between China and the U.S. had a notable impact on exports, production costs and confidence of enterprises. Compared with growth in new orders, the employment situation recovered only a bit, indicating that structural issues may exist in the labor market. Central policymakers have recently been emphasizing the strong growth in the domestic market. Faster construction of infrastructure projects, better implementation of upgrading the industrial sector, and tax and fee cuts are likely to offset the influence of the subdued overseas demand and soften the downward pressure on China’s economic growth.”

Also released, the NBS PMI Manufacturing rose to 49.8 in September, up from 49.5 and beat expectation of 49.7. While there was and improvement, the sector remained in contraction for the fifth straight months. Total new orders improved and swung back to growth, indicating improving domestic demand. But new export orders dropped for the 16th month. Meanwhile factories continued to cut jobs with employment sub-index largely unchanged at 47.0.

BoJ: Not reached an impasse on monetary policy measures

Summary of opinions at September 18-19 BoJ meeting, BoJ warned that the “contrast between the manufacturing and nonmanufacturing sectors has become more evident” at home and abroad. Downside risks to the global economy “have been increasing further” mainly in Europe due to Brexit.

Also, ” it is becoming necessary to pay closer attention to the possibility that the inflation momentum will be lost”. BoJ needs to “reexamine economic and price developments” at the next monetary policy meeting (MPM).

It is also important for BoJ to “communicate with an emphasis that it has not reached an impasse on monetary policy measures”. Additionally, with regard to a negative interest policy, “its impact on the overall economy should be considered first, rather than on banks’ business conditions.”

New Zealand ANZ Business Confidence dropped to -53.5 in September, down from -52.3. That’s also the worst reading since April 2008. Agriculture scored weakest confidence at -75.6 while manufacturing was best at -46.2. Activity outlook also dropped to -1.8, down from -0.5. Activity outlook was worst in construction at -7.1, best at services at -0.6.

ANZ noted that RBNZ will be “disappointed that its unexpectedly large 50bp cut in the Official Cash Rate last month does not appear to have had much impact on business’ sentiment or investment and employment intentions.” And, “prolonged lack of confidence is starting to feed its way through the economy and is threatening the tight labour market.” Also, “this gradual but prolonged economic slowdown is at risk of ceasing to be about the data and starting to become about the people.

RBA rate decision is one of the major focuses in a very busy week. The central bank is generally expected to cut interest rate again, by -25bps to 0.75%. The underlying theme is clear that the Australian economy can support an unemployment rate of below 5% without inflation concern. Unemployment did drifted up further to 5.3% while inflation staying below target. Governor Philip Lowe also indicated recently that at the meeting, “we will again take stock of the evidence … the Board is prepared to ease monetary policy further if needed …”. From Australia, performance of manufacturing and services, and retail sales would also be released.

US will also release ISM manufacturing, non-manufacturing and non-farm payroll report. Currently, fed fund futures are only pricing in 44.9% chance another rate cut by Fed on October 30, and around 70% chance by December 11. That is, that markets are not so sure if Fed will continue with its mid-cycle adjustment. Upcoming data, as well as the result of US-China trade negotiations in October would be crucial.

With 0.6806 minor resistance intact, further decline is expected in AUD/USD. Corrective rise from 0.6677 should have completed with three waves up to 0.6984. Firm break of 0.6677 will resume larger down trend. On the upside, above 0.6806 will bring recovery. But in any case, risk will stay on the downside as long as 0.6894 resistance holds. 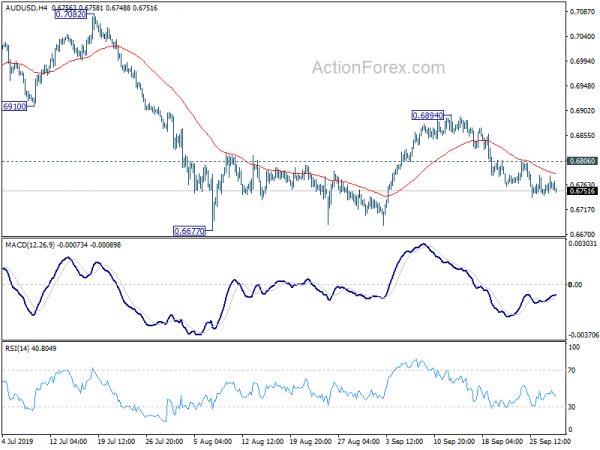 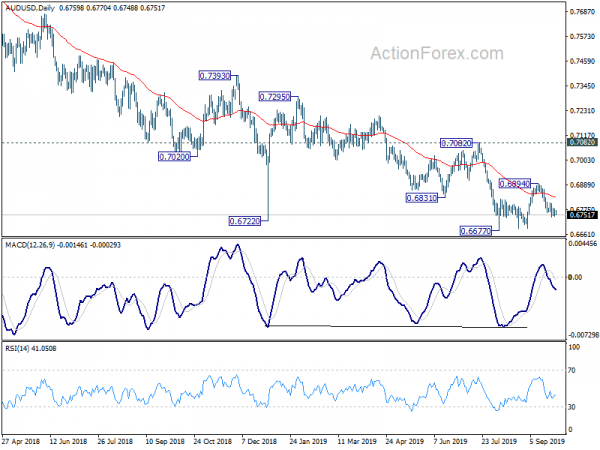