Australian Dollar tumbles broadly today after poor employment data, which suggests RBA is still on track for more easing. Additionally, the Aussie and Kiwi are weighed down by risk aversion in Asian markets. Hong Kong stocks lead others lower again on poor Chinese economic data, and continued unrest in the city. Investors are getting increasingly frustrated by the inability of the Chinese government to solve the deadlock. Yen is currently the strongest one, followed by Dollar and then Swiss Franc.

Technically, AUD/USD’s break of 0.6809 support suggests completion of rebound from 0.6670 at 0.6929. Further fall should be seen back to retest 0.6670 low. EUR/AUD’s breach of 1.6181 minor support also suggests bottoming at 1.5976. Further rise is now likely for 1.6432 resistance. USD/JPY is pressing 108.64 support. Firm break there will be an early sign of completion of rebound from 104.45. Deeper fall would then be seen to 107.88 support for confirmation. Such development could prompt deeper selloff in other Yen crosses.

RBNZ Bascand: The economy is somewhere near a turning point

RBNZ Deputy Governor Geoff Bascand said in an interview that “we actually think the economy is somewhere near a turning point.” He admitted the economy is “definitely going through a weaker stage” and “near-term risks “are probably more on the downside, but it’s a question of how long they persist,”

However, he added, “we’ve put a lot of stimulus in. We’ve got a bit longer to see how it’s transmitting. There’s time to see how that plays out and make a call in February if needed.”

The central bank surprised the markets by keeping the OCR unchanged at 1.00% yesterday. Governor Adrian Orr described the decision as a “tough one”, and the monetary policy committee had debated whether to “take one more insurance cut.”

Economy Minister Yasutoshi Nishimura blamed the weak GDP growth on worsening relations with South Korea. He said that had a “big impact” on exports, while dropped -0.7% from the prior quarter. Also, declines in in-bound tourists from South Korea was a drag, along with some impact form the prolonged trade war between US and China.

AUD/USD’s break of 0.6809 support suggests that corrective recovery from 0.6670 has completed at 0.6929 already. Intraday bias is turned back to the downside for retesting 0.6670 first. Break will resume larger down trend. On the upside, above 0.6841 minor resistance will turn intraday bias neutral and bring recovery. But risk will stay on the downside as long as 0.6929 resistance holds. 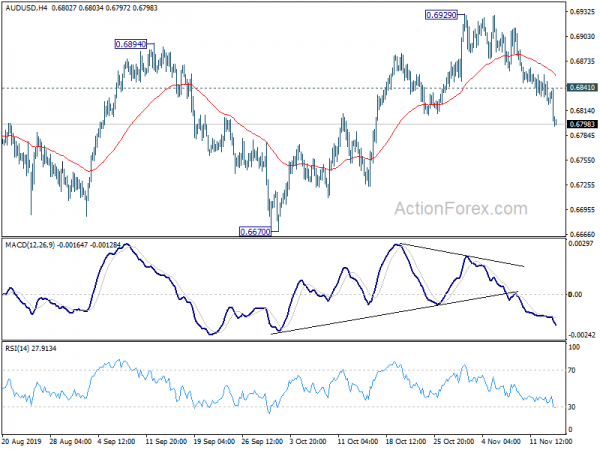 In the bigger picture, the case of medium term bullish reversal is building up with bullish convergence condition in weekly MACD. But there is no clear confirmation yet. As long as 0.7082 resistance holds, larger down trend from 0.8135 (2018 high) is still expect to continue to 0.6008 (2008 low). However, decisive break of 0.7082 will confirm medium term bottoming and bring stronger rally back to 55 month EMA (now at 0.7529). 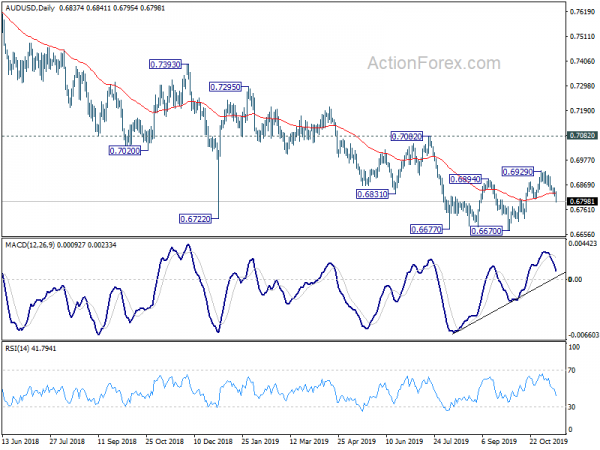