Yen, Swiss Franc and Dollar remain the strongest ones as Asia led risk aversion continues today. Additionally, treasury yields are back under pressure with some downside acceleration after US 10-year yield lost 1.9 while German 10-year yield lost -0.3. On the other hand, Australian Dollar remains the weakest, followed by New Zealand Dollar. Sterling is following as the third weakest after poor retail sales. Euro was mixed as Germany narrowly escaped technical recession.

Technically, downside acceleration in AUD/USD affirms that case that corrective rebound from 0.6670 has completed at 0.6929. Further fall is expected to retest 0.6670 low. EUR/AUD is extending the rebound from 1.5976, towards 1.6432 resistance. USD/JPY’s break of 108.64 minor support is taken as the first sign of near term reversal, after failing 109.31 structural resistance. Focus is back on 107.88. EUR/JPY will now look at 119.11 minor support. Break will align the outlook with USD/JPY and target 117.07 support next.

ECB Vice President Luis De Guindos said today the central bank has to widen its monetary policy toolkit to ensure its effectiveness. Though, he emphasized that monetary policy alone cannot address all problems. He urged country with fiscal spaces to do more. He added that European economy is not going to fall into recession but growth will be below potential.

Separately,chief economist Philip Lane said euro’s exchange rate is not a policy target for the ECB. But, “It’s plausible that the impact of rate cuts on the euro exchange rate has intensified over time.”

Governing council member Francois Villeroy de Galhau said “markets anticipate, reasonably in my view, that short-term rates are close to bottoming out”. But he also emphasized “these low short-term rates must and will remain in place: it would undeniably be a mistake to raise ECB rates now.”

Germany GDP grew 0.1% qoq in Q3, beat expectation of -0.1% qoq. Returning to growth suggests that the Eurozone’s largest economy had avoided a technical recession. Over the year, GDP grew 0.5% yoy, price and calendar adjusted. Economy Minister Peter Altmaier said “we do not have a technical recession, but the growth numbers are still too weak.”

UK retail sales dropped -0.1% mom in October while ex-fuel sales dropped -0.3% mom. Over the month, fuel was the only positive contributor to growth in sales, up 0.2% mom. Non-store retailing was flat while non-food and food stores declined.

RBNZ Bascand: The economy is somewhere near a turning point

RBNZ Deputy Governor Geoff Bascand said in an interview that “we actually think the economy is somewhere near a turning point.” He admitted the economy is “definitely going through a weaker stage” and “near-term risks “are probably more on the downside, but it’s a question of how long they persist,”

However, he added, “we’ve put a lot of stimulus in. We’ve got a bit longer to see how it’s transmitting. There’s time to see how that plays out and make a call in February if needed.”

The central bank surprised the markets by keeping the OCR unchanged at 1.00% yesterday. Governor Adrian Orr described the decision as a “tough one”, and the monetary policy committee had debated whether to “take one more insurance cut.”

Economy Minister Yasutoshi Nishimura blamed the weak GDP growth on worsening relations with South Korea. He said that had a “big impact” on exports, while dropped -0.7% from the prior quarter. Also, declines in in-bound tourists from South Korea was a drag, along with some impact form the prolonged trade war between US and China.

USD/JPY’s break of 108.64 minor support suggests short term topping at 109.48, on bearish divergence condition in 4 hour MACD. Also, it’s the first sign that whole rebound from 104.45 has completed after failing to sustain above 109.31 structure resistance. Intraday bias is back on the downside for 107.88 support first. Break there will affirm this bearish case and target 106.48 next. On the upside, firm break of 109.48 is now needed to confirm rally resumption. Otherwise, risk will stay on the downside in case of recovery. 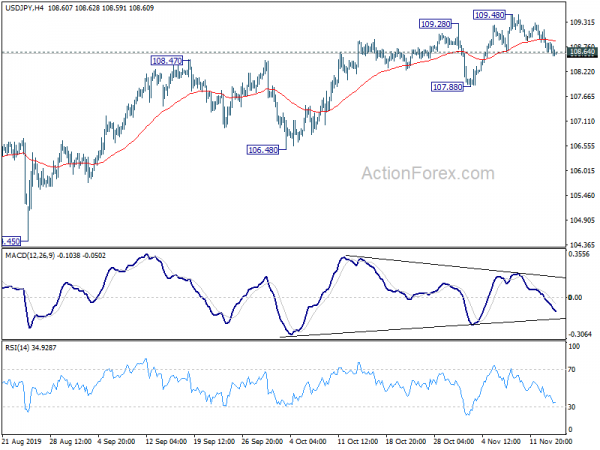 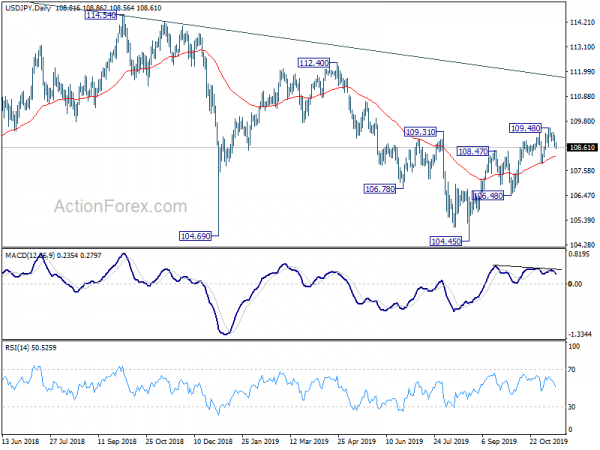