Commodity currencies are general higher today, with the help from risk appetite in European markets, and US futures. Poor Eurozone and UK data are largely shrugged off by investors. Canadian Dollar is so far the strongest, additionally supported by mild strength in oil prices. On the other hand, Yen is the weakest one, followed by Dollar. Nevertheless, with the exception of some Loonie pairs, the forex markets are generally bounded inside Friday’s range.

Technically, USD/CAD is heading back to 1.3042 support. Decisive break there will add to the case of medium term bearish reversal. CAD/JPY is eyeing 3.55 resistance. Break will resume whole rise from 78.50, for 85.23 structural resistance next. While Dollar turns weaker today, EUR/USD, GBP/USD, AUD/USD and USD/CHF are all staying in consolidations. There is no clear sign of breakout yet and more sideway trading could be seen.

US Empire State Manufacturing General Business Conditions rose to 3.5 in December, up from 2.9, but missed expectation of 4.0. Twenty-eight percent of respondents reported that conditions had improved over the month, while 25 percent reported that conditions had worsened. Meanwhile, indexes assessing the six-month outlook suggested that optimism about future conditions improved for a second
consecutive month. Expectations for six months ahead rose 10.4 to 29.8.

ECB Vice President Luis de Guindos said  “the current environment is characterized by a weakening of the macroeconomic outlook and increasing uncertainty, even though the latest indicators point to a stabilization of economic activity.”

He also warned that “the lower-for-longer interest rate environment creates strains on bank profitability with implications for financial stability.”  He urged Eurozone countries to considering raising counter cyclical buffers on bank. That would quickly be released in case of an eventual downturn.

Chris Williamson, Chief Business Economist at IHS Markit, said: “December’s PMI survey data sadly lacked festive cheer, indicating that the economy contracted for the third time in the past four months. The latest decline was the second largest recorded over the past decade, and increases the likelihood that the economy contracted slightly in the fourth quarter as Brexit-related uncertainty intensified in the lead up to the general election.”

Chris Williamson, Chief Business Economist at IHS Markit said: “The economy has been stuck in crawler gear for fourth straight months, with the PMI indicative of GDP growing at a quarterly rate of just 0.1%. There are scant signs of any imminent improvement. New order growth remains largely stalled and job creation has almost ground to a halt, down to its lowest for over five years as companies seek to reduce overheads in the weak trading environment and uncertain outlook. “While service sector growth remains encouragingly resilient in the face of the manufacturing downturn, any further softening of the labour market could cause weakness to spill over.”

Phil Smith, Principal Economist at IHS Markit said:”Manufacturing continues to weigh heavily on private sector output, with faster decreases in factory production and employment in December causing the manufacturing PMI to tick down for the first time in three months. Easing rates of decline in new orders and exports continue to provide glimmers of hope, however. The service sector remains resilient, with business activity rising at a stronger pace and business confidence perking up as well, though weak labour market trends are likely to be a restricting factor for the sector as we head into the new year.”

Eliot Kerr, Economist at IHS Markit said: “Following some green shoots in October and November, manufacturing production stagnated and new orders returned to contraction territory. Moreover, employment and outstanding business stuttered to somewhat quell hopes of sustained industrial recovery. On the other hand, service sector growth remained broadly in line with trend and continued to provide support to the economy. Taking into account other data, our Nowcast model points to a healthy growth rate of around 0.4% in the fourth quarter.”

CBA Chief Economist, Michael Blythe said: “The PMI readings indicate that the Australian economy ended 2019 on a softish note. The RBA’s ‘gentle turning point’ for the economy remains elusive. And the weakness in private spending evident in the Q3 GDP data looks to have continued in Q4, with a flow on to labour demand as well. There were also some early indications that the disruptions associated with the terrible bushfires around Sydney and elsewhere are having some impact”.

In the 2019-20 Mid-Year Economic and Fiscal Outlook (MYEFO), the government said the economy “continues to show resilience in the face of weak momentum in the global economy as well as domestic challenges such as the devastating effects of drought and bushfires.” However, there were some notable downward revisions in economic projections. In particular, through the two fiscal years from 2019 to 2021, household consumptions, and wages growth were deeply downgraded. These revisions affirm the case for more RBA easing.

Japan PMI Manufacturing dropped to 48.8 in December, down from 48.9. The index stayed below 50 threshold for the eighth straight month. PMI Services rose to 50.6, up from 50.3. PMI Composite was unchanged at 49.8.

Joe Hayes, Economist at IHS Markit, said: “Latest survey data showed that the Japanese economy remained stagnant in December… The most disconcerting takeaway from the fourth quarter survey data has been the marked loss of momentum in the services sector… It’s now clear that service sector is unable to offset the industrial weakness, which does not bode well for growth prospects in 2020”.

National Bureau of Statistics spokesman Fu Linghui said the data showed positive changes in the month and reiterated that China can achieve its full-year economic growth target. Fu also said China and US should continue bilateral trade talks and work towards removing all existing tariffs.

USD/CAD falls to as low as 1.3115 so far and intraday bias remains on the downside. Current decline from 1.3327 should target 1.3042 key support. Decisive break there will carry larger bearish implication. On the upside, above 1.3204 minor resistance will turn bias back to the upside for 1.3327 resistance instead. 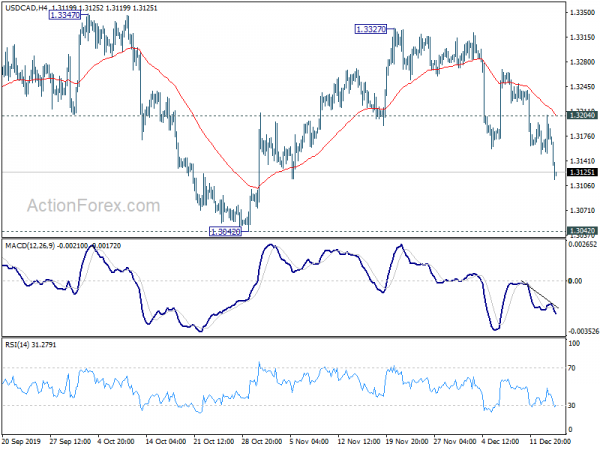 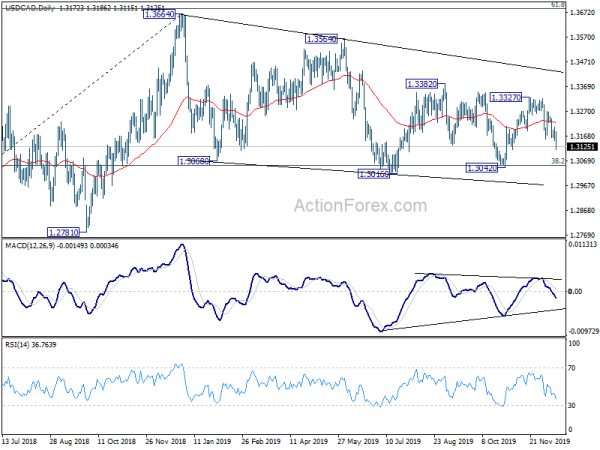