Dollar Surges as Focus Turns from Stock to Currency Markets

Focus somewhat turns from stock markets to currencies today. Major global indices are staying in rather tight range today, based on recent volatility. Fiscal and monetary measures from major central banks and governments are providing little support to sentiments, as coronavirus pandemic continues to worsen. Dollar jumps broadly today, followed by Canadian and then Yen. Australian is suffering steep selling, breaking 0.6 handle against the greenback. European majors are the next weakest.

Technically, EUR/USD’s break of 1.1055 temporary low suggests resumption of fall from 1.1496. Further decline should be seen to retest 1.0777 low. USD/CHF is pressing 0.9613 support turned resistance and break will add to the case of bullish reversal. GBP/USD is also heading to retest 1.1958 low. AUD/USD’s selloff could further accelerate to next projection level at 0.5716 if current 0.6008 (2008 low) is firmly taken out.

“The economy is on red alert. The financial market experts currently expect to see a decline in real gross domestic product in the first quarter, while also considering a further drop in the second quarter to be very likely. For the whole of 2020, the majority of experts currently expect a decline in real GDP growth of approximately one percentage point as a result of the corona pandemic,” comments ZEW President Achim Wambach.

Robert Chote, head of the Office for Budget Responsibility, said to the UK parliament that the government needs to unveil a big stimulus package that will help all businesses to counter the coronavirus impact.

He noted, “the lesson of earlier crises is that one sector’s problems in a situation like this quickly become every other sector’s problems.” Also, “this is not a time to be squeamish about one off additions to public sector debt. It’s more like a wartime situation,” he added.

Sir Charlie Bean, OBR member and former BoE deputy governor, said coronavirus hit “ought to be different from the financial crisis. ” “There isn’t a fundamental structural problem in the economy that needs correcting, at least in the most part.”

Minutes of March 3 RBA meeting noted that “it was becoming increasingly clear that COVID-19 would cause major disruption to economic activity around the world”. The recent outbreak outside of China ” raised the prospect of a broader and more extended disruption to the global economy”.

The global development “was having a significant effect on the Australian economy, particularly in the education, transport and tourism sectors”. Uncertainty was also likely to “affect household spending and business investment in coming months.” Q1 GDP was likely to be “noticeably weaker than previously expected”.

Board members have considered a “number of scenarios” regarding monetary policy response to coronavirus outbreak. If the outbreak would be contained in the very near future, “maximum effect” of further stimulus would be felt in the “recovery phase”. However, this scenarios was considered “very unlikely, with the more realistic scenario being that the outbreak would have a significant effect on the Australian economy.”

RBA cut interest rate by 25bps to 0.50% at that meeting. Earlier on Monday, it indicated that there will be additional measures to be announced this coming Thursday. Markets generally expect another rate cut to bring the benchmark rate down to 0.25%.

New Zealand government announced a massive NZD 12.1B stimulus program to support the economy at the time of disruptions by coronavirus pandemic. That’s equivalent to 4% of the country’s GDP. The package includes NZD 2.8B in income support, NZD 5.1B in wage subsidy support, NZD 2.8B in business tax changes, NZD 500m support for aviation sector and NZD 600m boost for health services.

Finance Minister Grant Robertson said the economy is expected to fall -1% by Q1 if 2021 if the package is implemented, better than -3% without the support. He also told the parliament that recession was “almost certain” in New Zealand”. “We will have an extended period of deficits and our debt as a country will have to substantially increase,” he added. 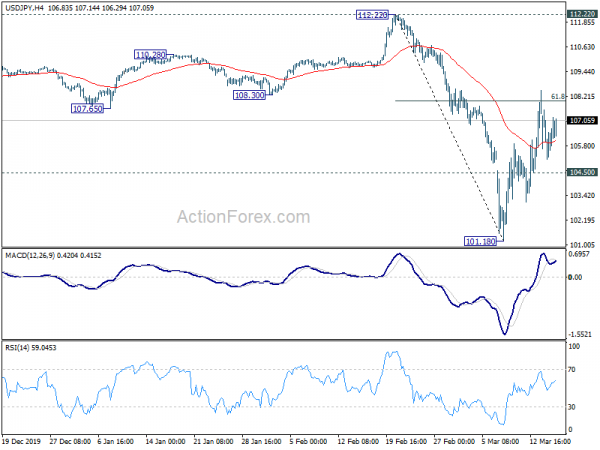 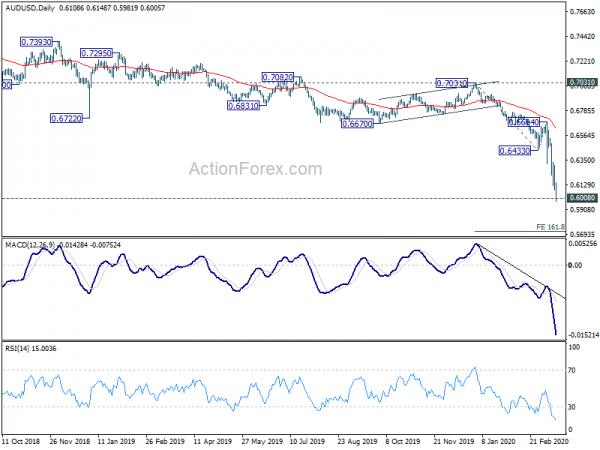