Despite extended stock rally in the US overnight, Asian markets turned mixed. Renewed weakness in oil price is a factor weighing on sentiments, as WTI crude oil is down at 11 handle, threatening 10 handle again. Gold also dips below 1700 handle, as Dollar is trying to recover. For the week so far, Aussie remains the strongest one, followed by Sterling. New Zealand Dollar is the worst performing on RBNZ rate cut expectations, followed by Swiss Franc.

Technically, Gold’s break of 4 hour 55 EMA should confirm rejection by 1747.75 resistance Consolidation from there is extending with another falling leg towards 1644.67 resistance turned support. USD/JPY is holding above 106.91 support so far, but this level remains vulnerable. Break will resume whole decline from 111.71. Such development, if happens, might drag EUR/JPY through 115.54 temporary low in EUR/JPY and 131.90 temporary low in GBP/JPY.

US stocks rose on talks of automakers reopening

US stocks closed higher overnight on optimism that coronavirus lockdown is going to end soon, partially at least. DOW rose 1.51%, S&P 500 gained 1.47% while NASDAQ added 1.11%. WSJ reported that General Motors, Ford and Fiat Chrysler are targeting to resume some productions on May 18. The decision came after the executives’ meeting with United Auto Workers and Michigan Governor Gretchen Whitmer’s office last week.

None of the companies, nor Whitemer, confirmed the news. It’s should be just a matter of a week or two later when some sort of reopening should happen in less risky areas. Meanwhile, the severely impacted New York state is planning some reopening on May 15 too. 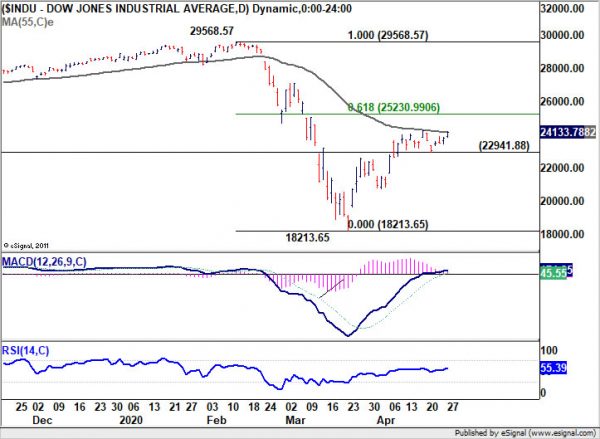 Australian Dollar has been the strongest one for the week so far, as the country is heading towards relaxation of lockdown rules. New South Wales Premier Glady Berejiklian announced today that, starting Friday, groups of two adults and their children are allowed to visit other households for social gatherings. Bondi Beach and two neighboring beaches in Sydney were reopened to local residents on Tuesday after being closed a month ago.

While Aussie’s strength has been impressive, it’s partly skewed upward by the strong rebound in AUD/NZD. Meanwhile, some Aussie pairs are already close to key resistance levels. Hence, we’d be very alerted on topping signals for the near term. For example, AUD/JPY is now relatively close to near term cluster resistance at 69.95, 61.8% retracement of 76.54 to 59.89 at 70.17. 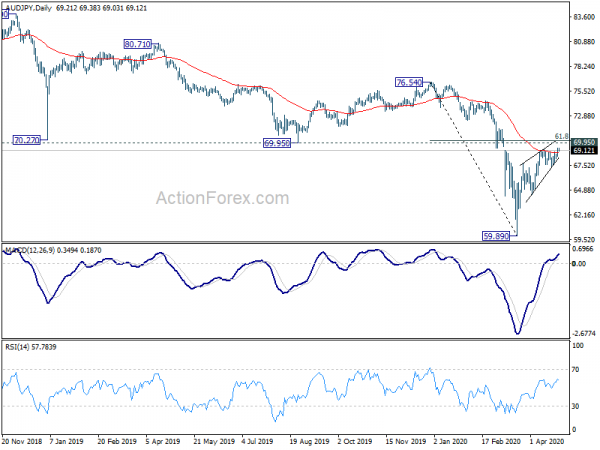 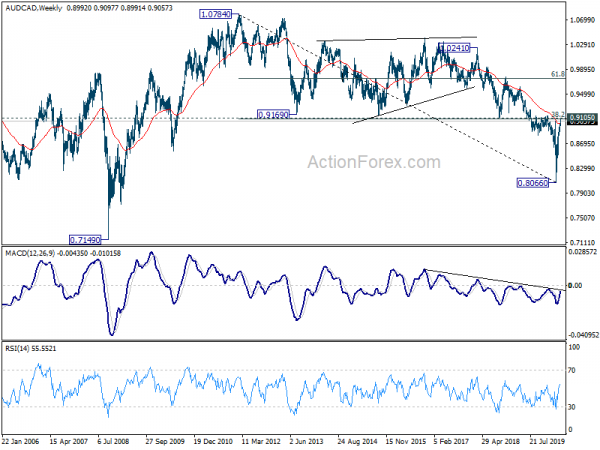 AUD/NZD surges as RBNZ forecasts to cut to -0.50% this year

New Zealand Dollar is having completely different fortunate comparing to Australian Dollar, even though the country is a step in the lockdown exit. Divergence on RBA and RBNZ policy expectations is a key driver in the comparative moves. Westpac said in a report last week that RBA target cash rate would stay at currently 0.25% level until end of 2023. On the other hand, Westpac said in another report today that RBNZ could cut interest rate to -0.50% by November.

Westpac expects a deeper decline in Q2 GDP by -16%, then followed by a stronger rebound of 13% in Q3. However, it said, “beyond the initial bounce we now expect the recovery phase will be slower, as it will take longer to overcome the damage done by unemployment and business failures”. Unemployment rate will peak at 9.5% followed by a “slow return” to below 5%.

It emphasized that “monetary policy not only needs to come to the party, it needs to spike the punch”. RBNZ is expected to double its QE to NZD 60B in May. OCR would be cut from current 0.25% to -0.50% in November. but the timing is uncertain.

AUD/NZD hits as high as 1.0745 so far as rebound from 0.9994 extends. Current rise is seen as the third leg of the long term sideway pattern from 1.0016. Further rise could be seen to 1.0865 resistance. Real test is from trend line resistance (now at 1.0894). Sustained break there would pave the way to 1.1676 key long term resistance. And in any case, near term outlook will stay bullish as long as 1.0476 support holds, in case of pull back. 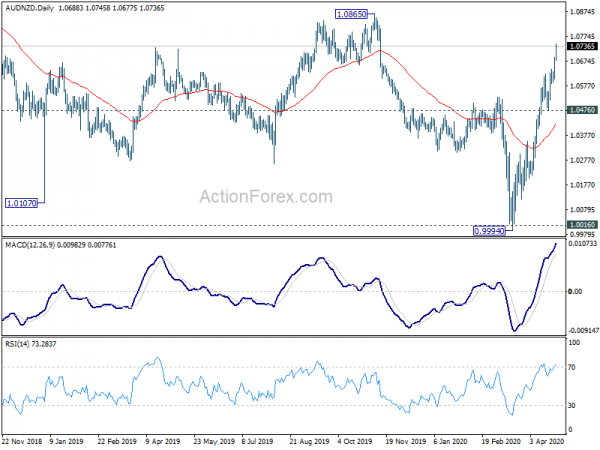 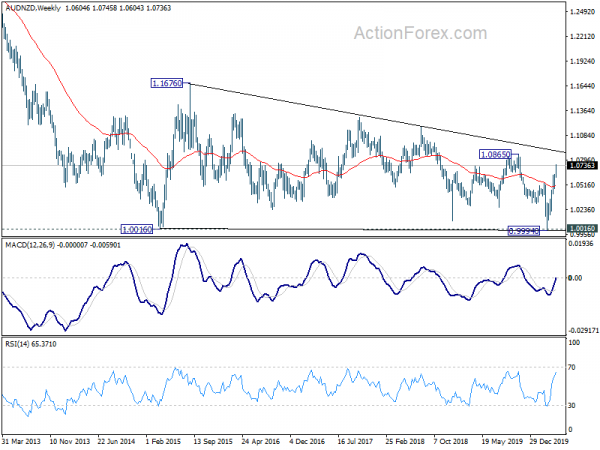 Japan unemployment rate rose 0.1% to 2.5% in March, matched expectations. Looking ahead, UK will release CBI realized sales. US will release wholesale inventories, goods trade balance and S&P Case-Shiller house price. But Conference Board US consumer consumer would probably be most market moving. 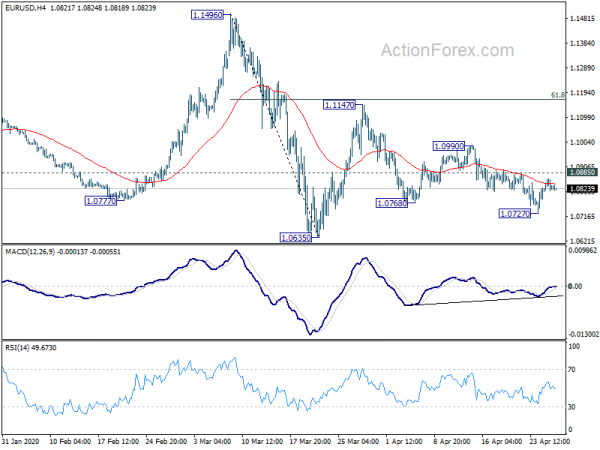 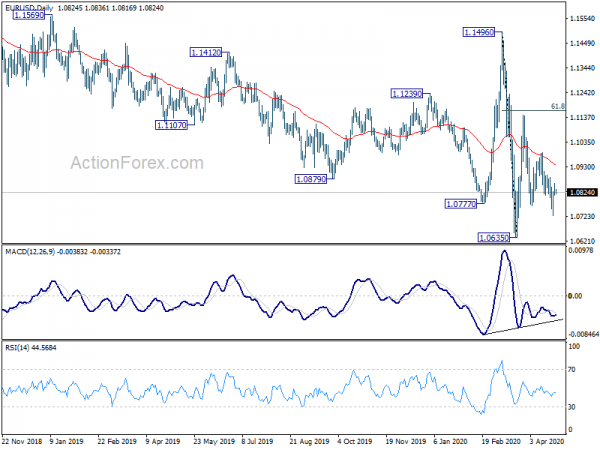