Canadian Dollar is a main focus today with BoC rate decision featured. Recent strong risk-on markets haven’t given the Loonie much lift. It’s upside is somewhat capped as oil price turned into consolidation after last week’s spike. Also, traders turned cautious before BoC’s indication on the chance of a micro rate cut. Elsewhere, Dollar and Yen remain pressured even though Asian markets have turned mixed. Euro is taking a breather after yesterday’s rally. 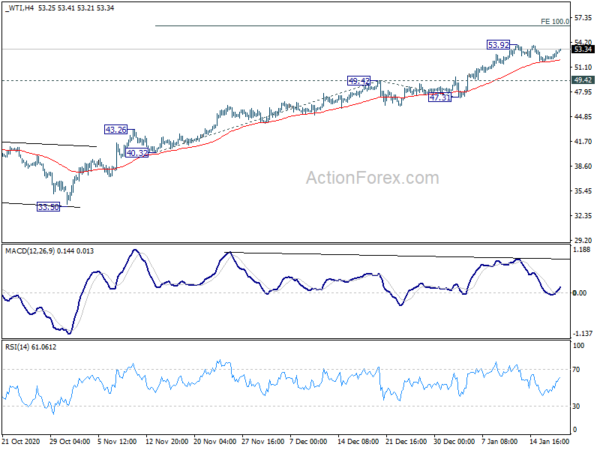 EUR/CAD in recovery ahead of BoC, downside breakout still expected

BoC rate decision is a major focus today. It’s widely expected to keep overnight rate unchanged at 0.25%. The size of the asset purchase program will also be held at CAD 4B per week. Focuses will be on Governor Tiff Macklem’s guidance on the chance of a “micro rate cut” ahead. That is, lowering interest rate to a new effective lower bound, while keeping it positive. Also, BoC will release new economic projections.

Here some some previews:

Canadian Dollar is outperformed by European majors this week so far. EUR/CAD’s decline halted ahead of 1.5313 support and recovered. Though, the structure suggests that it’s merely a corrective rise, which is in line with our bearish view. We’d expect the recovery to be limited by 1.5534 resistance to bring decline resumption sooner or later. Firm break of 1.5313 will resume whole fall from 1.5978 to 100% projection of 1.5978 to 1.5313 from 1.5783 at 1.5118. 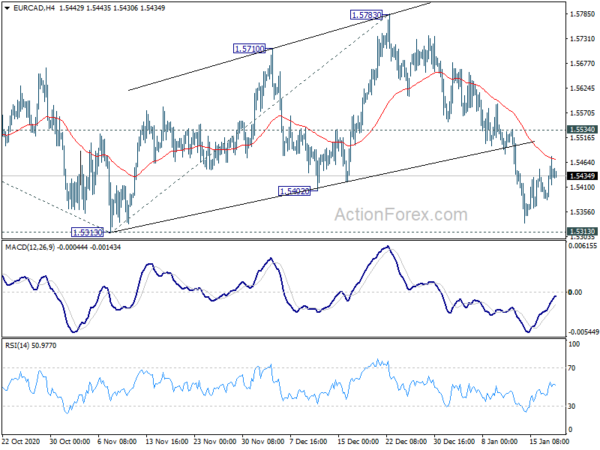 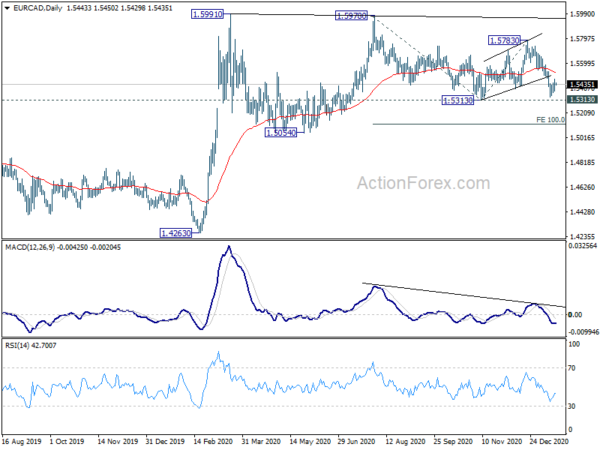 Yellen: The world has changed, defeating the pandemic is the most important thing

US stocks closed higher overnight after Treasury secretary nominee Janet Yellen’s Senate confirmation hearing. “The world has changed,” she said. “In a very low interest-rate environment like we’re in, what we’re seeing is that even though the amount of debt relative to the economy has gone up, the interest burden hasn’t.”

She gave a strong node to President-elect Joe Biden’s fiscal package, to be unveiled next month. “The most important thing we can do is to defeat the pandemic, to provide relief to American people and to make long-term investments that make the economy grow and benefit future generations,” said Yellen.

Yellen described China as the most important strategic competitor with its “abusive, unfair and illegal practices.” She also said China is “guilty of horrendous human rights abuses” in response to a question on whether China had committed “genocide” in treating of Uyghurs.

In a last-minute proclamation, outgoing Secretary of State Mike Pompeo determined China “has committed genocide against the predominantly Muslim Uyghurs and other ethnic and religious minority groups in Xinjiang”, and “this genocide is ongoing”. Biden’s nominee for Secretary of State Antony Blinken also said in his confirmation hearing, “The forcing of men, women and children into concentration camps; trying to, in effect, re-educate them to be adherents to the ideology of the Chinese Communist Party, all of that speaks to an effort to commit genocide.”

BoE Haldane: Recovery probably at rate of knots from Q2

BoE Chief Economist Andy Haldane said current tougher lockdown restrictions are threatening to bring the UK economy into a double-dip recession. That next slump could be “shorter, sharper shock” than the last one in 2007. Though, unemployment could be capped as long as Chancellor of the Exchequer Rishi Sunak  maintains the furlough wage subsidies until the economy has recovered to with 5-10% of pre-pandemic level. Current tighter

Also, “if we get that recovery that I expect to start coming on stream, probably at the rate of knots from the second quarter, that will hopefully then eat away and improve the prospects of reemploying those million people who have lost their jobs”, Haldane added. “Ultimately there’s a timing question — timing the end of the furlough scheme in such a way that the economy is recovered sufficiently to prevent any losses of jobs.”

Australia Westpac Consumer Sentiment dropped -4.5% to 107 in January, down from 112.0. The fall came in where there was domestic border closures, emergence of coronavirus clusters in some states and the sharp upswing in infections globally. Overall, “it still points to healthy consumer sentiment”.

Regarding RBA’s next meeting on February 2, Westpac said the board “seems almost certain to maintain its current policy stance”. The central bank decided in November the intention to purchase AUD 100B in government and semi-government bonds. Markets would be interested in any guidance in respect to the program, which is set to end at the end of April. Westpac expects a second program of AUD 100B afterwards. 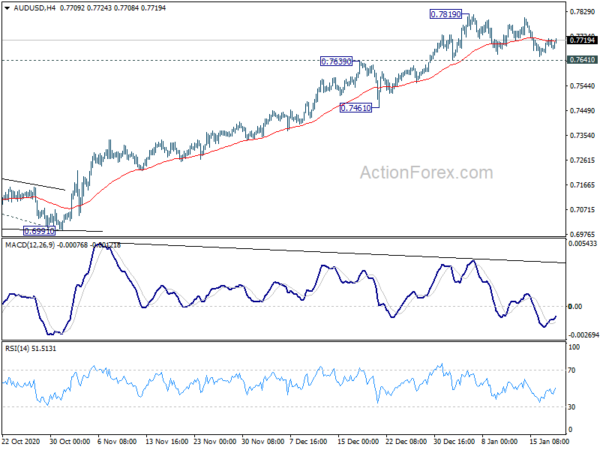 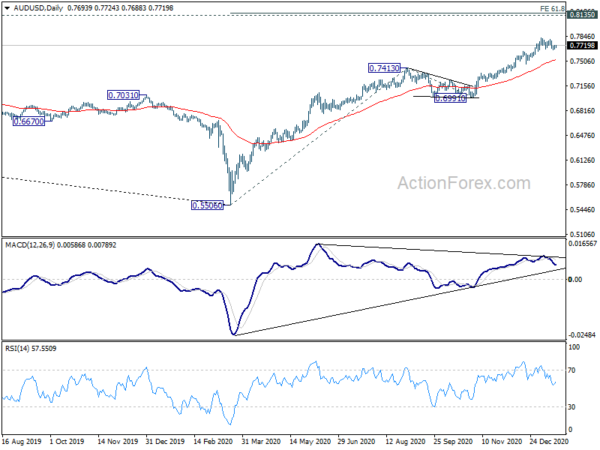