Commodity currencies ended as the weakest ones. Australia lead the way with surprisingly weak Q3 GDP figure. Canadian Dollar was additionally pressured by BoC and oil, but saved by strong job data. Swiss Franc was the strongest one for the week, followed by Japanese Yen, on risk aversion. Mild weakest in emerging market currency like Turkish Lira gave the Franc a slight upper hand. Euro, Dollar and Sterling were mixed.

Many of the theme have not concluded yet. Markets will be eager to see more progress in the 90-day US-China trade talks. Brexit vote will be held on Tuesday. Italy may or may not submit its revised 2019 budget. ECB will meet on Thursday. Oil could be under pressure again after the production cut. And, yield and stocks are continuous theme.

Worries over US-China trade war were blamed by many as the reason for the stock market selloffs. Some criticize that the meeting of Trump and Xi on December ended without concrete progress. More pointed to the arrest of Chinese tech giant Huawei’s CFO in Canada, by the request of the US, as a move that would complicate or even jeopardize the trade negotiations. We do not share the same view.

Let’s reiterate that a 90 days ceasefire period (from Dec 1) is now set for the negotiations. Words from Trump and White House economic advisor Larry Kudlow were affirmative. Trade Representative Robert Lighthizer, the only one in the cabinet who knows how to make a trade agreement, entered the ring to let the talks. China has agreed to buy soybeans immediately and would lower auto tariffs during the trade talks. China has also released plans for strict protection of intellectual property. And even after the arrest of the Huawei executive, no Chinese officials have linked the act with trade negotiations. The developments have been positive.

In the financial markets, China’s Shanghai SSE has indeed closed the week up 0.68%. Hong Kong HSI just lost -1.67%. Remember that in the background, Japan said it will ban the purchase of equipment from both Huawei and ZTE. EU has raised alarm on Huawei’s security risks. UK BT said it will bar Huawei from the core of its 5G networks, and remove it from the core of its 3G and 4G networks. These were pretty bad news for the China and Hong Kong tech sector. But stocks responses were rather limited. Staying in Asia, Singapore Strait Times closed the week down -0.21%. Nikkei, though, was heavier hit and lost -3.01%.

Instead, worries over slowdown in the advanced economy, slump in oil prices and yield curve inversion in the US are seen by us as the main driving force in the markets. November Eurozone PMI composite was finalized at 52.7, lowest since September 2016. In particular, Germany PMI composite hit 47-month low at 52.3. As Markit noted, “it was in Germany where the euro area’s growth slowdown was centred”. The disappointing US non-farm payroll report, which showed only 155k growth, also add to the argument that job market growth momentum has peaked.

10-year yield is now pressing key support level between 2.808 and 55 week EMA. For now, we’d still favor this support to hold and bring rebound. However, firm break there will indicate medium term reversal and deeper fall would be seen to 2.034/621 support zone.

To conclude this part, we believe that the sentiments of investors are already bearish on the economic fundamentals. Even if Huawei’s CFO is suddenly released and stocks rebound, that wouldn’t be long lasting. As barring any strong upside surprise after 90 days of negotiations, we don’t expect the results to prompt a turnaround in sentiments neither. Damages of Trump’s global tariffs were already done.

OPEC+ production cut not enough to turnaround oil and CAD 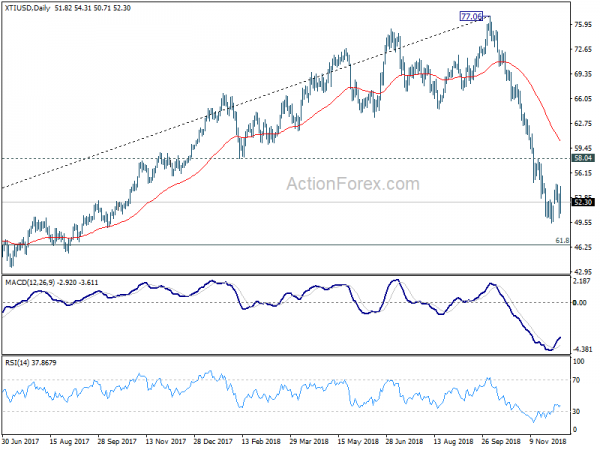 Back to Canadian Dollar, it’s sold off sharply after BoC sounded worrisome on oil prices slump. BoC has made it very clear that “activity in Canada’s energy sector will likely be materially weaker than expected.” And, “the persistence of the oil price shock, the evolution of business investment” will be taken into account in consideration of the pace of rate hikes to neutral.

BoC Governor Stephen Poloz also admitted that “data released since our October Monetary Policy Report have been on the disappointing side “. And, “the economy has less momentum going into the fourth quarter than we believed it would.” However, the Loonie was then saved by stellar job data which showed 94.1k growth in November. Unemployment rate dropped to 5.6% lowest since 1976.

After all, Canadian Dollar ended the week as the third weakest, just next to Aussie and Kiwi. And USD/CAD’s pull back was held well above 1.3160 support so far. The Loonie remains vulnerable to further selloff, should WTI crude oil dips below 50. 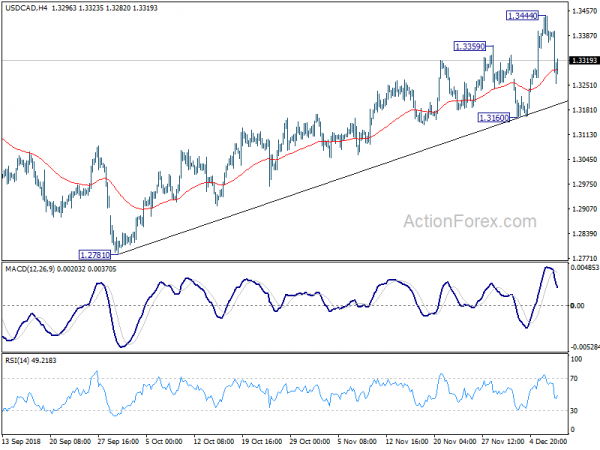 EUR/GBP will be an interesting pair to watch in the upcoming week. On the one hand, there is the highly anticipated Brexit vote in the UK parliament. Prime Minister Theresa May will need 320 votes backing her Brexit plan. But according to a Guardian estimate, May would lose by as many as 200 votes. There is still a chance for May to go back to Brussels to work one something to tweak the deal, if she just lose by a small margin, say below 50. And the situation will be totally different if she really lose by a wide margin.

But a tricky situation is that the European Court of Justice’s advocate general said last week that UK has the right to withdraw Brexit notice unilaterally, up to the point of formal conclusion of the deal. ECJ will deliver it ruling on Monday, a day before the UK parliamentary vote. And ECJ followed the advocate’s opinion as widely expected, that will open up a new possibility for Brexit. That is, May’s defeat could then mean no-deal Brexit, or no Brexit at all. Such uncertainty was what kept the Pound rather quiet last week.

ECB meeting will be another focus. No change in its immediate plan is expected. That is, interest rates will be kept unchanged and ECB will stop asset purchase program after December. The main question is how ECB is viewing the current slow down in Eurozone growth. Would they maintain that Q3’s slow down was just temporary? Or would they change the tune. A dovish shift doesn’t necessarily change the forward guidance of keep interest rates at present levels at least “through the summer of 2019”. ECB has enough flexibility in the guidance. But more cautiousness would likely mean more pressure on Euro.

EUR/GBP’s break of 0.8939 resistance on Friday should send the cross to 0.9098 resistance, from a pure technical view. But the above two events are enough to change the picture completely. 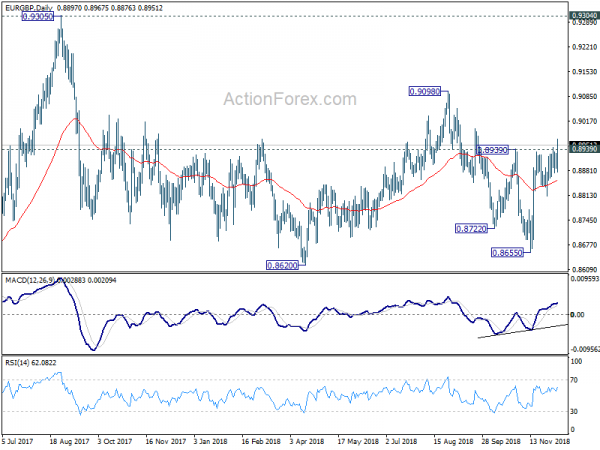 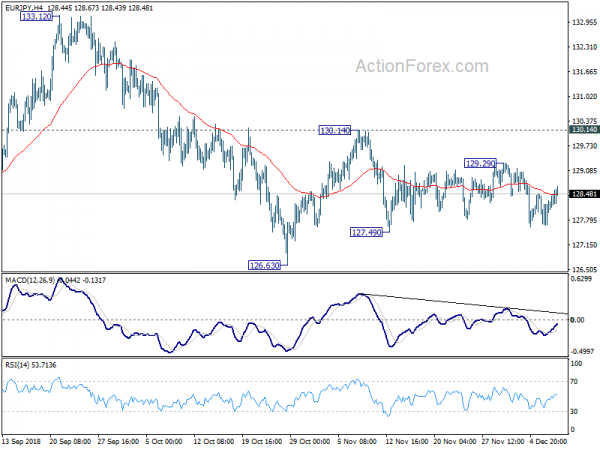 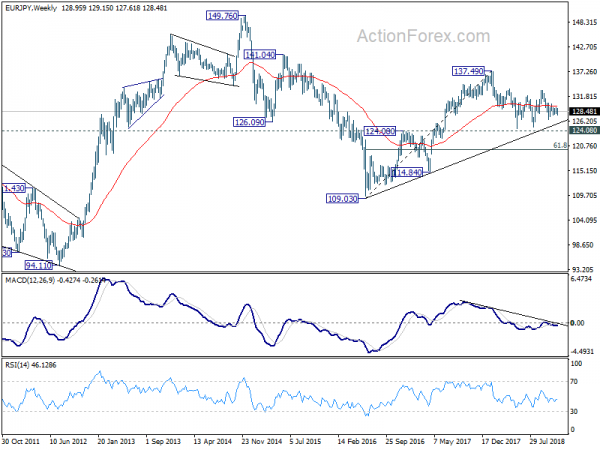 EUR/AUD rebounded strongly to as high as 1.5845 last week. The break of 1.5781 resistance argues that decline from 1.6357 has completed much earlier than expected. Initial bias is turned back to the upside for 1.5984 support turned resistance first. Break will bring retest of 1.6357 high. On the downside, break of 1.5706 minor support will turn intraday bias neutral and bring consolidation first, before staging another rally. 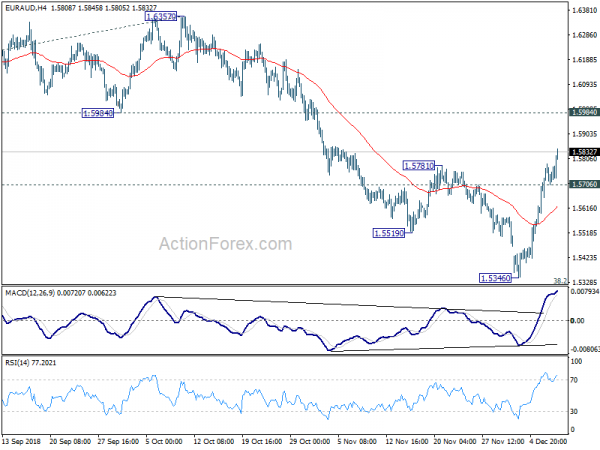 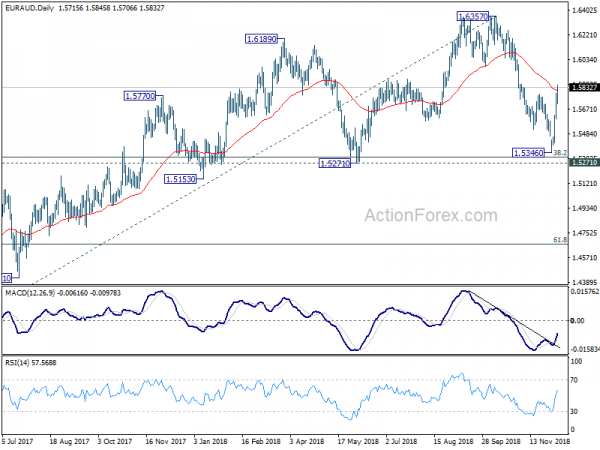 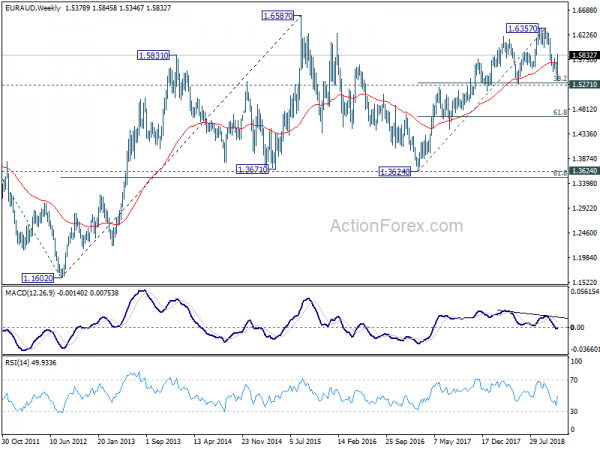 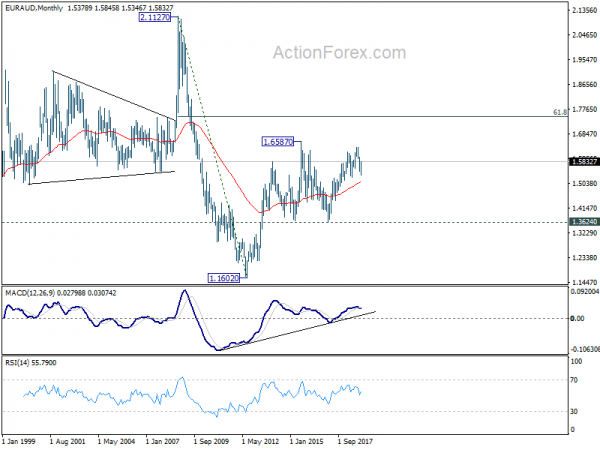