Week Ahead – More CPI Data Incoming; Is the Inflation Storm about to Get Bigger?

As inflation in the United States hits a three-decade high, there could be further nasty surprises on the way as more countries publish their monthly CPI prints. The focus will also be on the economic recovery, as there is a host of other data coming up, including from the United Kingdom, Japan, China and Canada. Will global bonds join the selloff in US Treasuries if inflation surges elsewhere too, or will the dollar continue to ascend?

US retail sales might add fuel to dollar’s rally

The transitory narrative is starting to crumble after America’s consumer price index jumped to a 31-year high of 6.2% year-on-year in October. Although the shock beat is unlikely to impact near-term policy by the Fed, especially as tapering has only just kicked off, it does raise some serious questions about how long the US central bank will be able to stay ‘patient’. Up until now, the patchy nature of the recovery was one of the reasons why policymakers were erring on the side of caution. But with the US economy having now more than recouped the lost output from the pandemic slump and both the labour market and consumption appearing to be on a steadier footing after some recent wobbles, the Fed could be losing the argument for maintaining policy so accommodative. 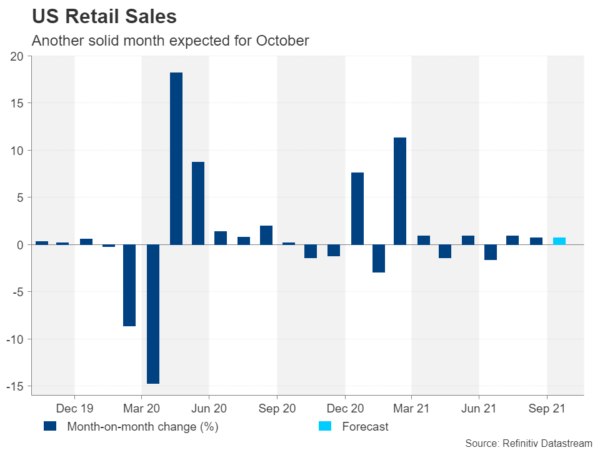 After the CPI report, all eyes next week will be on the retail sales numbers for October due Tuesday. Retail sales are expected to have risen by 0.7% over the month, the same pace as in September, which would suggest the final quarter of the year got off to a solid start.

Various manufacturing indicators will shed further light on how strong the growth momentum is in the world’s largest economy. The Empire State manufacturing index is released on Monday, along with industrial output figures, while the Philly Fed manufacturing index comes out on Thursday. Other key data include housing starts and building permits due Wednesday.

If the upcoming numbers underscore the bullish picture, Treasury yields could extend their gains, propelling the US dollar to fresh multi-month highs. The dollar index has hit 16-month peaks, breaking above the 95 level, mainly at the expense of sterling.

Can the pound find solace in upcoming flurry of data?

It’s been a dreadful couple of weeks for the British currency. Investors were left scrambling after the Bank of England confounded market expectations of a rate hike at its November meeting, instead keeping them on hold and pummelling the pound. But just as the pound was starting to get back on its feet, then came another blow from the US inflation shock.

However, there will be plenty of opportunities next week for sterling to regain some lost ground as it’s going to be a packed release schedule. The labour market report will launch things on Tuesday. If there is another big gain in employment in September, this would ease concerns at the Bank of England about the impact of the government furlough scheme coming to an end.

October inflation data on Wednesday could further fuel bets that the BoE will hike rates at one of its upcoming meetings if CPI rises by more than expected. Forecasts are for annual CPI to hit 3.9%, well above the BoE’s upper limit of 3%. 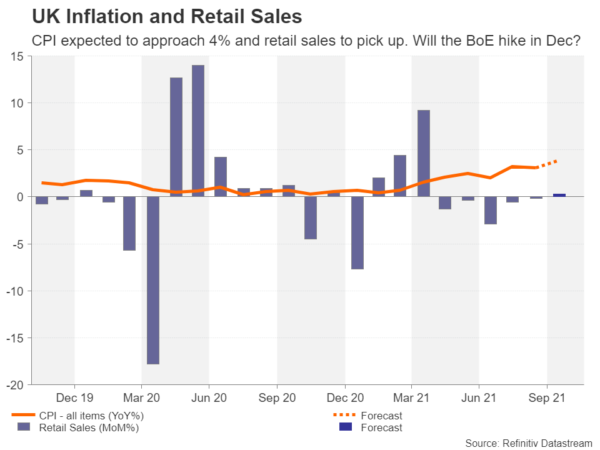 Finally, retail sales figures will be crucial on Friday as UK consumer spending has been quite sluggish since May. Another negative print in October would undermine any boost from hot inflation readings.

CPI and retail sales numbers will also be doing the rounds in Canada. Annual inflation had surged to 4.4% in September, which was an 18-year high. Although the Bank of Canada has brought forward slightly the expected timing of its first post-pandemic rate hike to Q2/Q3, investors are strongly pricing in a move in March.

If the data on Wednesday shows that inflation continued to march higher in October, it would bolster the case for an even earlier hike, lifting the Canadian dollar, which got pushed to one-month lows versus the mighty greenback this week.

Also to watch out of Canada are retail sales figures on Friday.

Rate hike speculation to dominate for aussie and kiwi

Staying with commodity-linked currencies, China’s monthly data dump might set the mood for global markets and risk-sensitive FX pairs on Monday as industrial output, retail sales and fixed-asset investment readings for October are published. For the aussie, quarterly wage growth data out of Australia will be important too on Wednesday. The Reserve Bank of Australia wants to see wage growth hit 3% in a sustained fashion before contemplating raising rates so progress towards that goal in Q3 would be positive for the battered Australian dollar. 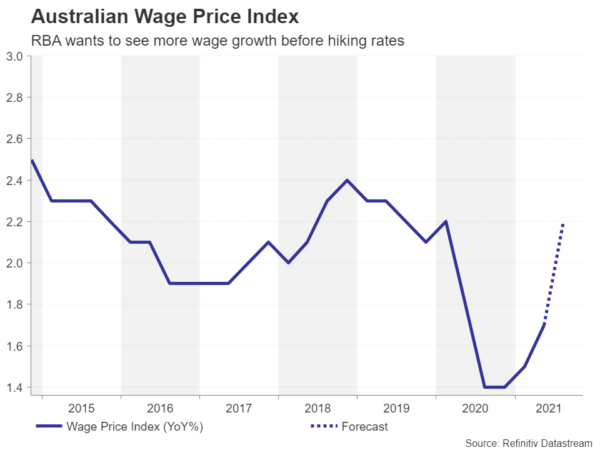 Meanwhile, the RBA will be publishing its November meeting minutes on Tuesday, which could reveal more about the discussions around the rate hike timeline following the decision to drop the three-year yield target.

The Reserve Bank of New Zealand will not be able to escape investors’ attention either as its quarterly business survey is out on Thursday. Aside from gauging business sentiment, the survey also asks business managers about their forecasts for inflation. If the report points to inflation expectations still trending higher (one- and two-year expectations have already shot past 3% and 2%, respectively), it would strengthen the odds of a 50-bps rate increase by the RBNZ when it meets later this month. This could provide some much-needed upside for the New Zealand dollar, which, like its aussie and loonie counterparts, has been unable to overcome the greenback’s advances.

Japan’s inflation problem – or lack of

In Japan, it will likely be somewhat of a grimmer picture for the yen as Q3 GDP numbers due on Monday will probably show the economy contracted by 0.2% quarter-on-quarter. Machinery orders and trade numbers for September will follow on Wednesday. 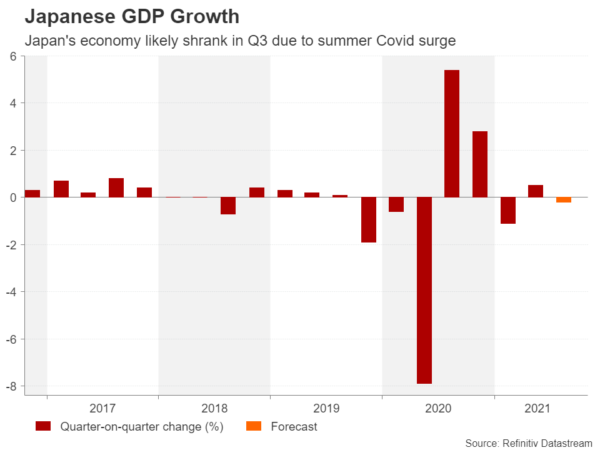 With Japan’s fifth and worst virus wave finally abating, the GDP estimates may be considered to be somewhat out-of-date, although there are concerns about how quickly the economy can rebound amid the supply constraints and soaring energy prices that are causing pain for manufacturers.

However, when it comes to the yen, it’s all about yield differentials and the Bank of Japan is not about to step away from its yield-bashing policies anytime soon. Prices may be spiralling higher in most parts of the world, but in Japan, they remain muted. The core CPI rate out on Friday is expected to have held steady at 0.1% y/y in October. Without any danger of inflation overshooting the BoJ’s 2% target over the coming months, there is no prospect of the yen ending its post-pandemic slide against its major peers anytime soon.