The Bank of Japan will be in the spotlight next week. It will likely reaffirm that rates won’t rise for a long time, leaving the yen at the mercy of foreign central bank moves and risk appetite. The People’s Bank of China will also meet and could loosen policy to empower economic growth, although its actions are usually more important for stock markets rather than FX.

BoJ – A hint of optimism

The Japanese economy is turning a corner. A weaker yen has helped boost exports, businesses are becoming more confident according to the latest Tankan survey, the unemployment rate stands at just 2.2%, and the nation has finally escaped deflation.

All that sounds good, but the economy is not out of the woods yet. Consumption remains weak, wage growth is anemic despite the tight labor market, and the Omicron wave that is sweeping through the country is a major threat to the recovery.

The inflation rate speaks for itself. It is barely positive despite massive supply disruptions and soaring energy prices, so ‘organic’ inflationary pressures remain subdued. 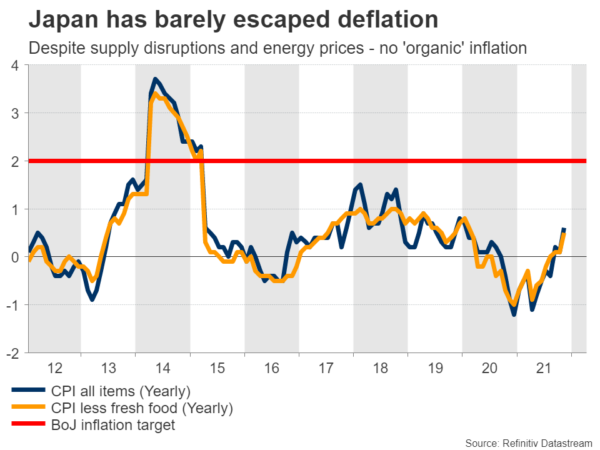 This means that while the central bank might strike a slightly more optimistic tone next week, any tightening moves are still far away. Recent media reports suggest the BoJ is debating when it can start telegraphing an eventual rate hike, but that’s unlikely to happen until next year.

As for the yen, relative monetary policy suggests the outlook remains negative, especially against the currencies that will be enjoying higher rates, like the dollar or sterling. That said, there are a couple of factors that could prevent deep losses in the yen. 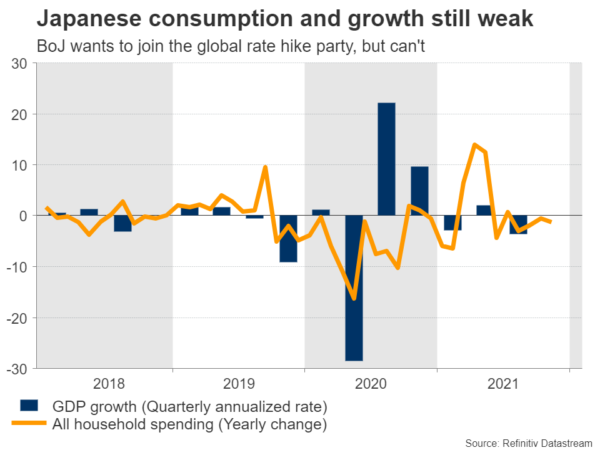 The first is the massive spending package the new Prime Minister is about to unleash to power up the recovery. Beyond that, with liquidity being withdrawn from the global financial system, volatility episodes in the markets could become more frequent, allowing the defensive yen to enjoy brief periods of strength.

The trend seems negative, but it could be a stormy ride.

Over in China, the show will get going on Monday with GDP numbers for the last quarter. Retail sales, industrial production, and fixed asset investment for December will also be released. All these indicators are expected to have lost steam, with annual GDP growth slowing to 3.6% from 4.9% previously.

That’s no surprise considering the crisis in the property sector and the energy shock during that quarter, not to mention the recent lockdowns in many cities as the government sticks to its zero-covid policy. 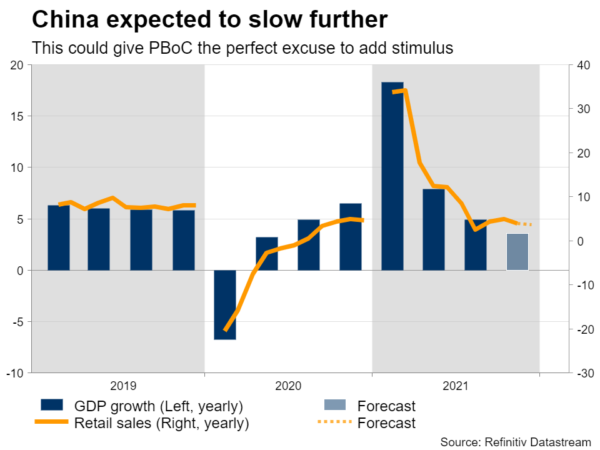 But it could be a case of ‘bad news is good news’ if GDP numbers are weak, since that would give the People’s Bank of China the perfect excuse to loosen policy again to counter the economic slowdown.

Liquidity measures from the PBoC typically impact the local stock market the most, but if traders sense this could stabilize the economy, there could be some effect on China-sensitive currencies like the Australian dollar too.

Speaking of Australia, the nation’s employment report for December will be released on Thursday. The aussie has recovered substantially lately as iron ore prices jumped, yet the outlook is still clouded. 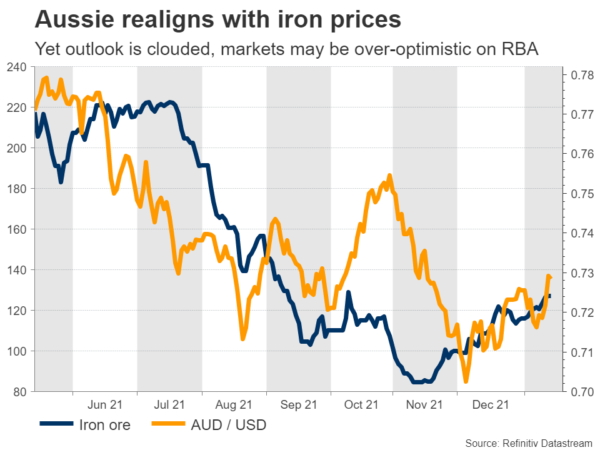 Markets are pricing in four rate hikes by the Reserve Bank this year, which seems over-optimistic and allows room for disappointment. The Australian economy is not that strong and could suffer spillover effects from China, its largest trading partner by far.

There is also a heavy barrage of data releases from the United Kingdom. The ball will get rolling with jobs numbers for November on Tuesday, ahead of inflation stats for December on Wednesday and retail sales on Friday.

Sterling enjoyed a very strong start to the year, drawing fuel from intensifying speculation that the Bank of England will raise interest rates again next month. The implied probability of a hike at that meeting currently stands at 78%. 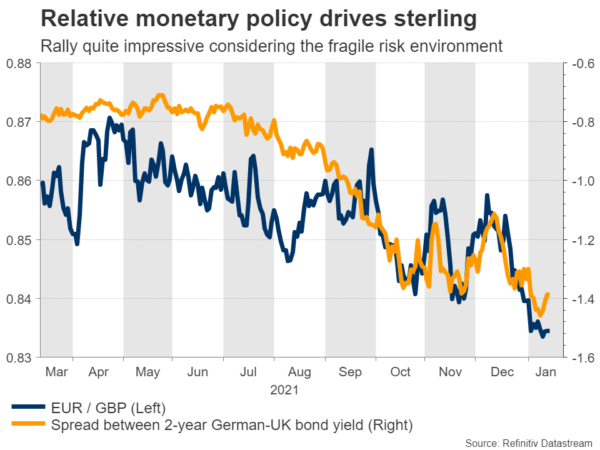 The pound’s ability to stage such a powerful rally despite weak risk sentiment in the markets is quite impressive and suggests monetary policy expectations are really what’s driving FX markets right now.

Markets get excited about Canada

Meanwhile, the Canadian economy is improving at such a dramatic pace that markets now assign an 80% chance for a rate increase this month, in contrast to the Bank of Canada’s latest guidance that April is the earliest possible date. As such, the upcoming inflation stats on Tuesday and retail sales on Friday could be crucial. 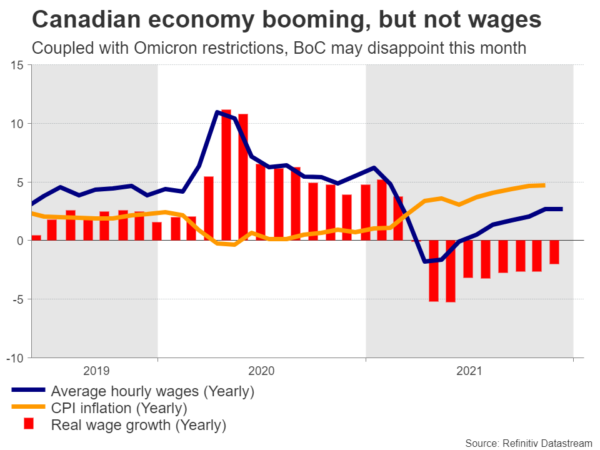 All in all, a rate increase this month seems like a bridge too far. While the labor market is booming and inflation is hot, wage growth remains below pre-pandemic levels and Omicron is rampaging through the country, with many provinces imposing tougher restrictions lately. This could keep the BoC hesitant to take any risks for now.

The loonie has bounced back with force lately thanks to this speculation and the rebound in oil prices, and although the big picture remains favorable, it may be in for a disappointment by the central bank later this month.