Week Ahead – A Plethora of Data, RBNZ Meeting, Nut Focus on Fed Minutes

There will be no shortage of data releases in the coming week and the RBNZ is poised to hike rates again. But with investors still undecided about the implications of the latest US inflation report on Fed policy, the FOMC minutes might steal the limelight. Meanwhile, thinning liquidity as more traders head for their holiday destinations increases the likelihood of big knee-jerk reactions as markets obsess about the pace of monetary tightening and the risks of a recession.

The Reserve Bank of New Zealand is tipped to lift its official cash rate (OCR) for the seventh straight meeting on Wednesday, becoming the first major central bank to take borrowing costs as high as 3% in this cycle. However, the hawkish posturing may be reaching the end of the line and there are downside risks for the New Zealand dollar from the meeting.

Back in May, the Bank had forecast that the OCR would peak just below 4% by September 2023. That means there would only be a 100-basis-point increase remaining if it hikes rates by 50 bps in August as expected. But that is assuming that the rate path doesn’t get revised lower. 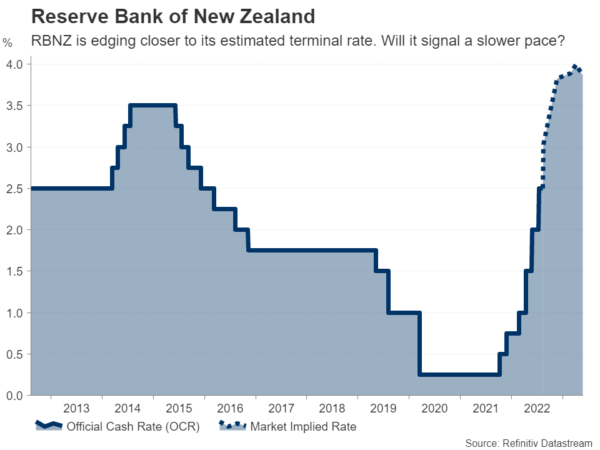 The RBNZ will publish updated forecasts in its quarterly Monetary Policy Statement and given the recent easing in energy and other commodity prices, policymakers might predict a slightly lower terminal rate. But it’s not just the inflation outlook that’s changing. Economic growth is slowing too.

Consumption in New Zealand has been subdued lately and the jobless rate unexpectedly ticked up in the second quarter, prompting policymakers to emphasize the negative risks to growth in the July policy statement.

Hence, the kiwi, whose rebound versus the US dollar picked up speed over the last week, faces the possibility of being knocked down by either a lower projection of the terminal rate or hints that the pace of tightening could soon switch to 25-bps increments, or both.

Aussie hoping for more upside before next RBA decision

In neighbouring Australia, the July employment report due Thursday will be the highlight, though wage data for the second quarter a day earlier will be important too. The Reserve Bank of Australia abandoned the use of forward guidance at its last meeting amid the uncertainty surrounding the forecasts for both inflation and growth, so the upcoming releases will likely play a significant role in swaying the odds for or against a 50-bps rate hike in September. 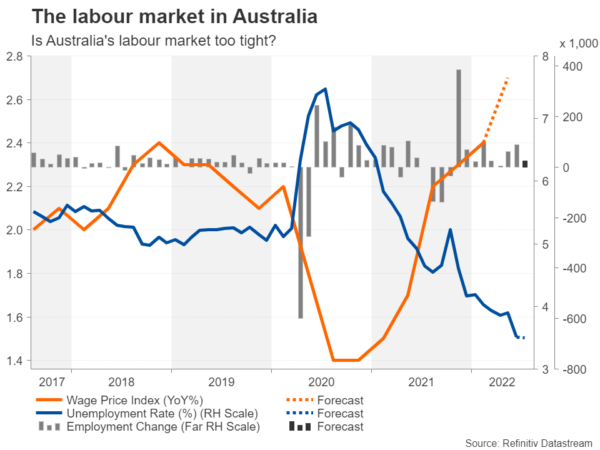 Investors widely believe the RBA will raise rates by only 25 bps next month so the scope for expectations to shift towards a 50-bps move is quite large if the job figures impress. There may also be some clues about the size of the next hike in the minutes of the August meeting out on Tuesday.

Having just surged back above the $0.70 handle, the Australian dollar could extend its strong gains if rate hike expectations are ratcheted up. Ahead of the domestic agenda, traders will be keeping an eye on some key metrics out of China on Monday. Growth in industrial output and retail sales is anticipated to have accelerated in July. If the data confirms that China’s recovery is gathering steam, there could be a boost for the aussie, as well as broader risk appetite at the start of the week.

Will retail sales and Fed minutes spoil the mood?

Signs of cooling inflation in America have tempered bets of a 75-bps rate rise by the Federal Reserve in September, hurting the dollar but reviving the stalled rally on Wall Street. It comes after both consumer and producer prices moderated in July. Next week’s slew of indicators will turn the attention back on the economic momentum.

The housing market is one of the sectors of the economy being closely watched right now for possible signs of a downturn. Building permits and housing starts for July are released on Tuesday, followed by existing home sales on Thursday.

There will be several clues on the manufacturing sector too as the New York and Philadelphia Feds publish their monthly surveys on Monday and Thursday, respectively, while industrial output is out on Tuesday.

However, most of the focus will be on Wednesday when the latest retail sales numbers and the minutes of the Fed’s July meeting are due. Retail sales likely decelerated substantially in July and analysts have pencilled in month-on-month growth of just 0.1%, after jumping by 1% in June. 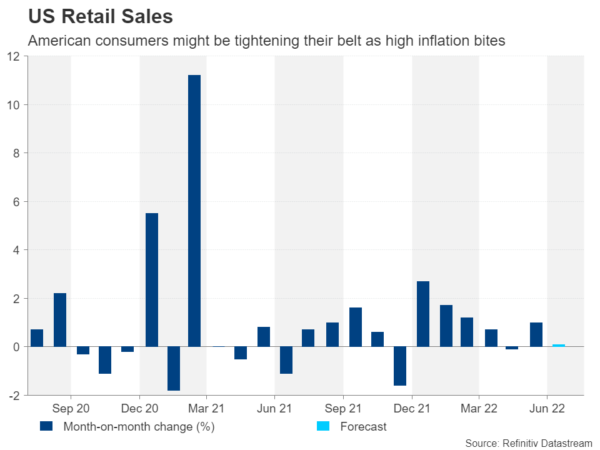 Recent data that’s been on the soft side has had a mixed effect in dampening risk sentiment despite fuelling recession fears as the negative pressure has been countered by falling Treasury yields. However, with Fed officials standing firm on their determination to get inflation down towards their 2% target even after the CPI miss, the pullback in yields has likely gone as far as it can for now.

A poor retail sales print could therefore spark a bigger reaction this time, at least in equity markets. Though, the fallout for the dollar might be more limited as investors will probably want to wait for the Fed minutes to help them make up their minds about which way policymakers will lean in September.

The minutes are unlikely to add anything new to the rate hike debate, but if they reinforce the view that the majority of FOMC members are still keen on frontloading, it could push the odds of a 75-bps increase back up, having dipped below 40% this week, while keeping Treasury yields supported.

After the US, the inflation spotlight will turn to the UK where the headline rate of the consumer price index is forecast to hit a fresh four-decade high of 9.7% y/y in July. Despite the Bank of England getting an earlier start on monetary tightening than many of its peers, Britain now boasts the highest inflation rate among the major economies.

The pain on consumers is already being felt. Retail sales have grown only once this year, in April, and are projected to have been flat in July. 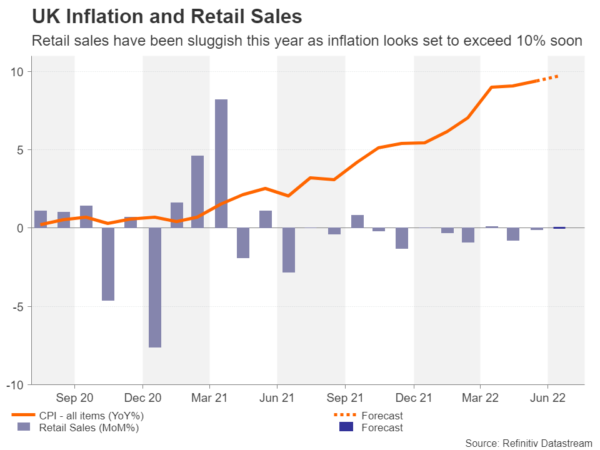 With neither the CPI figures on Wednesday, nor Friday’s retail sales estimates likely providing much cheer, there might be some good news from Tuesday’s labour market report, as the unemployment rate is expected to have held steady at 3.8% in the three months to June.

Although strong employment numbers might offer some support to sterling, another jump in CPI would probably heighten the risk of stagflation following the contraction in UK GDP in the second quarter, weighing on the currency.

Inflation readings are also due in Canada and Japan next week. The Canadian CPI data, out on Tuesday, will be followed by producer prices and retail sales figures on Friday. Japanese traders on the other hand will be watching the Q2 GDP estimate on Monday ahead of Friday’s inflation stats.

Japan’s economy is predicted to have expanded by a solid 0.6% q/q in the June quarter, helped by stronger consumption and a rebound in exports. Inflation, meanwhile, is expected to have heated up in July, with core CPI edging up to 2.4% y/y. 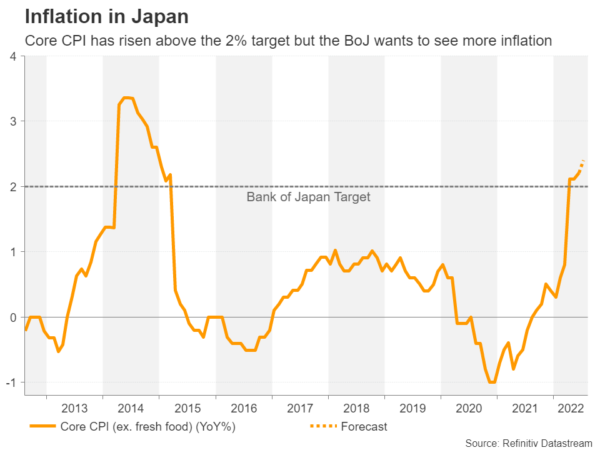 Nevertheless, upbeat numbers would probably do little to defend the yen when US yields are being bolstered by renewed hawkish rhetoric from the Fed. Aside from widening yield spreads, Japan’s growing trade deficit has also been a sore point for the safe-haven Japanese currency amid soaring energy costs. Trade data out on Wednesday is expected to show the deficit rose in July, with energy-driven imports far outstripping the jump in exports.

A new headache for the euro

In Europe, it’s going to be a quieter week as the only key releases are the second GDP estimate for Q2 (Wednesday) and the final CPI reading for July (Thursday). Germany’s ZEW economic sentiment gauge on Tuesday might attract some attention too, while outside of the euro area, the Norwegian krone will be on standby for a repeat by the country’s central bank of the double hike from the last meeting when it sets rates again on Thursday.

But when it comes to the euro, investors will probably be more interested in headlines concerning the Rhine River – a major transport route for Europe, particularly Germany. The worsening drought on the continent has led to shrinking water levels in European rivers and some ships have already started to reduce their loads.

If water levels continue to decline, it will become increasingly difficult to transport commodities and other raw materials across Europe, hitting coal and petrol shipments and exacerbating the energy crunch.