As the coronavirus pandemic could very likely lead the world to recession, global central banks have rushed to inject liquidity through rate cuts another other unconventional measures. However, interest rates have already stayed at very low levels before the crisis. The room for further rate cuts is limited. Some central banks have been adopting negative interest rates, while others have not ruled out the possibility. Some central banks remain reluctant to join the camp, citing the limited effectiveness and negative impacts on banking profitability. Below is a summary of major central bank policies in light of the present crisis.

Policy Rate: Fed funds rate at 0-0.25%. FOMC announced emergency rate cuts on March 3 and March 15, lowering the policy rate by -150 bps in total. The Fed funds rate range has returned to the lowest level after the global financial crisis in 2007/08. While the policy rate has reached virtually zero, the members remain reluctant in adopt negative interest rate. As Fed chair Jerome Powell noted on March 15, it is required by law that banks “may receive earnings” by depositing money. Legal clarification may be needed if banks are required to pay as they use deposit facility. He also cited that the experiences of negative interest rate in the Eurozone and Japan are not satisfactory. Worse still, it could hurt banking profitability. Powell added that negative interest rate would hurt money market funds which invest in high-quality short term securities with the goal of maintaining stable net asset value and stable dividend payout.

QE: Earlier in the month, the Fed announced to purchase assets worth of US$700B over coming months. Of which, US$500B will be on Treasuries and US$200B on MBS. The central bank accelerated the action 8 days later, pledging that it would buy “in the amounts needed” to support the market. Fed’s balance sheet currently stands at about 18% of GDP. It could increase to 25%, the percentage similar to the peak reached in 2015, or more.

QE infinity suggests that the Fed could spend up to US$8 trillion in asset purchases. Currently, Fed is holding 15% of marketable US debt excluding bills and is legitimate to hold as much as 70% of each issue. Meanwhile, the central bank is limited to US$1.5 trillion in US Treasuries with a maturity of 15 years or more and it has so far committed to not buy government debt in the primary market.

Other measures: The Fed announced new lending programs worth of US$300B to support all areas of the financial markets.

Policy Rate: At the March meeting, ECB left the deposit rate unchanged at -0.5%. We expect the central bank would have to lower the policy rate further in coming month. This would have to be accompanied by adjusting the tiering system so that bank profitability would not be further damaged.

QE: ECB introduced an envelope to buy up to 120B euro until the end of the year. Front-loading purchase is likely. We expect the central bank to buy one-third or half of the amount in coming months. The focus would be on corporate bonds. 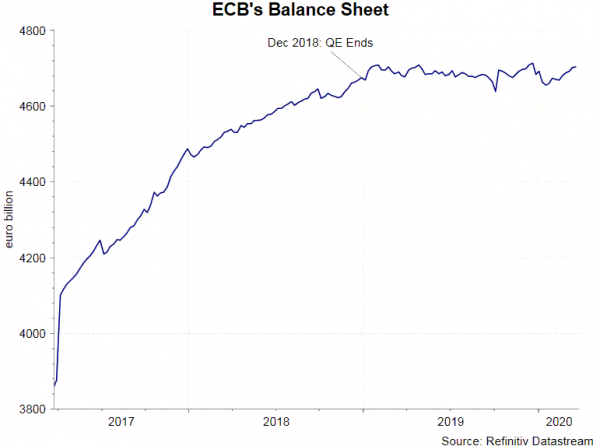 Other measures: ECB launched new LTROs until June 2020 to fund banks’ liquidity needs. It also improved TLTRO-III by relaxing loan eligibility and increasing incentive rate, effective June 2020. Meawhile, ECB announced a 750B euro Pandemic Emergency Purchase Programme (PEPP), in order to counter the serious risks to the monetary policy transmission mechanism and the outlook for the euro area posed by the outbreak and escalating diffusion of the coronavirus.

Policy Rate: Policymakers lowered the Bank rate by -65 bps in two emergency cuts this month, taking the policy rate to 0.1%, the lowest level on record. The members continue to see zero as the lower bound and negative interest rates were “not an option” in the UK. Yet, nothing is entirely ruled out at the time of crisis.

QE: Boosting the size of asset purchase by +200B pound, BOE has pledged to buy a total of 645B pound. The increase will focus on government bond (gilt), but corporate bonds are also included.

Policy Rate: BoJ left the policy rate (the uncollateralised overnight call rate) unchanged at -0.1% at the March meeting. Governor Kuroda affirmed that there is still room for rate cut if needed. We doubt whether the central bank would lower interest rate further to the negative territory.

QE: It raised the upper limit for the annual purchase pace of ETFs at 12 trillion yen for now. Yet, it also affirmed that the annual purchase guideline stays unchanged at 6 trillion yen. This confusing guideline might suggest that BOJ is “prepared” to increase purchases when needed but. In a similar vein, BOJ also raised the upper limit of J-reit purchase to 180B yen, while maintaining its annual purchase guideline at 90B yen. BOJ noted that it will “take additional monetary easing steps as needed without hesitation with a close eye on the impact from the coronavirus epidemic for the time being”. We are skeptical of the effectiveness of the “new” measures. Back in 2014, BOJ announced a QE program, increasing JGB holdings by 80 trilion yen per year. However, the target has been missed since 2017. Governor Haruhiko Kuroda admitted in an interview last year that “the 80 trillion yen phrase is a symbol of monetary easing”. The lack of commitment has put BOJ’s credibility at risk.

Policy rate: The emergency rate cut of -25 bps last week sent the cash rate to a record low of 0.25%. As this has reached the effective lower bound, there is no room for further rate cut.

QE: RBA introduced a QE-styled yield curve control measure, pledging to maintain 3-year government bond yield at 0.25% through bond purchases in the secondary market. Since the measure is announced, RBA has now bought A$18 billion in government securities, including semi-government bonds, since it launched quantitative easing on March 20 to blunt the economic fallout of the coronavirus pandemic.

Other measures: RBA introduced a 3-year funding facility to authorised deposit-taking institutions (ADIs) at a fixed rate of 0.25%, providing at least AUD 90B over the period. Eligible institutions will have access to additional funding if they increase lending to business, especially to small and medium-sized businesses. RBA will continue providing liquidity to Australian financial markets by conducting one-month and three-month repo in open market operations daily and longer-term repos of six-month maturity or longer at least weekly.

Policy Rate: RBNZ adopted an emergency rate cut by -75 bps, slashing the OCR to 0.25%. As the central bank has not ruled out the possibility of negative interest rate, further rate cut is possible.

QE: Like RBA, RBNZ also joined the QE camp as it pledged to buy as much as NZD30B of government bonds in the market. This could double the central bank;s balance sheet.

Policy Rate: Reducing twice this month, BOC’s policy rate now stands at 0.75%. We expect another rate cut is likely when the members meet in April. Governor Stephen Poloz has noted last week that he “doesn’t like the idea of negative rates that much”, and it is “very unlikely to be needed”.

QE: BOC has not adopted any QE program so far. However, there have been growing speculations that it would have to do so.

Other measures: BoC announced that it would buy CAD500M of mortgage bonds every week. In terms repo, the central bank would expand the range of eligible securities as collateral. Moreover, the central bank has also planned to acquire securities directly linked to corporate credit lines in an effort to ease market tensions.