Global equities rebound and are paring back some of this week’s steep losses ahead of weekly close. Dollar is also recovering, in particular against Euro and Sterling. US Treasury Secretary Steven Mnuchin comment on Fed also helped give the greenback a mild lift. But for today, Canadian and Australian Dollar are the strongest one so far, while Dollar is the third. On the other hand, Sterling is the weakest one, followed by Euro.

Technically, with Dollar’s rebound, focus is now turned to 1.1534 minor support in EUR/USD and 1.3132 minor support in GBP/USD. Break of these two levels will indicate completion of this week’s rebound and could trigger more upside in the greenback.

US Mnuchin on Chinese Yuan, trade and Fed

US Treasury Secretary Steve Mnuchin met with China PBoC Governor Yi Gang on the sidelines of the IMF summit in Indonesia. Mnuchin said after the meeting that “I expressed my concern about the weakness in the (yuan) currency and that as part of any trade discussions, currency has to be part of the discussion. And he added that “we had a productive explanation from his standpoint on those issues” regarding Yuan’s depreciation against Dollar. It’s reported that Yi told people in a closed-door session that China’s monetary policy was on an opposite cycle to that of the US.

Mnuchin declined to comment on whether China would be named a currency manipulator in the upcoming Treasury report. But he emphasized that “The currency report is something we report to Congress. It is done pursuant to two separate pieces of legislation. This is not a political document.” But on trade, Mnuchin insisted that”It has to be that we can reach an agreement on action items that can rebalance the relationship. We’ve made it clear that if they have real action items that they want to discuss that we will listen.”

On Fed, Mnuchin said “The president likes low interest rates. The president is concerned about the Fed raising interest rates too much and slowing down the economy and those are obviously natural concerns.” Meanwhile he called this week’s stock market rout as a “natural correction after the markets were up a lot”. And according to Mnuchin, it’s not related to high interest rates and Fed policy and “there’s really no new information in the market on the Fed or on trade for that matter.”

ECB President Mario Draghi reiterated in an IMF conference that “broad-based growth in the euro area will continue.” He added the central bank’s policy measures “continue to underpin domestic demand, which remains the mainstay of the ongoing expansion.” Global expansion will also continue to benefit Eurozone exports.

On inflation, higher headline inflation reflected rise in energy prices. “While measures of underlying inflation remain generally muted, they have been increasing from earlier lows.” And he echoed the monetary policy account that “uncertainty around the inflation outlook is receding.” While ECB is on course to stop asset purchases, he emphasized that “significant monetary policy stimulus is still needed to support the further build-up of domestic price pressures and headline inflation developments over the medium term.”

On financial stability, he said “recent episodes of heightened financial market volatility have led to only limited contagion across countries and markets.” However, “the uncertainty triggered by a cliff-edge Brexit could have the potential to pose a more significant downside risk to financial stability.”

Chancellor of the Exchequer Philip Hammond said that there are still big issues to resolve in Brexit negotiation. He said “what has happened over the last week, ten days, is that there has been a measurable change in pace.” However, “that shouldn’t conceal the fact that we still have some big differences left to resolve. So process is a lot more positive this week – substance still very challenging.”

European Commission President Jean-Claude Juncker emphasized that “Those who place all their bets on the scenario of a no-deal are wrong: we will have to find a deal. And I think we will find it,” He added that “the Irish issue is obviously extra difficult. It’s true we are not where we should be to strike a deal.”

China exports to US grew despite trade war, imports shrank for another month

China’s trade surplus surprisingly widened in September, as trade surplus with US jumped to record high at USD 34.1B. As trade war started and escalated to another phase, exports to US continued to grow while imports from the US contracted for another month. For the year as a whole, China continued to have faster import growth with EU, than exports.

For the month of September

From January to September

With 4 hour MACD crossed below signal line, a temporary top is formed at 1.3257. Intraday bias in GBP/USD is turned neutral first. Another rise cannot be ruled out yet. But we’d still expect upside to be limited by 1.3316 key fibonacci level to limit upside to bring down trend resumption eventually. On the downside, below 1.3132 minor support will turn bias back to the downside for 1.2921 first. However, sustained break of 1.3316 would pave the way to next fibonacci level at 1.3721. 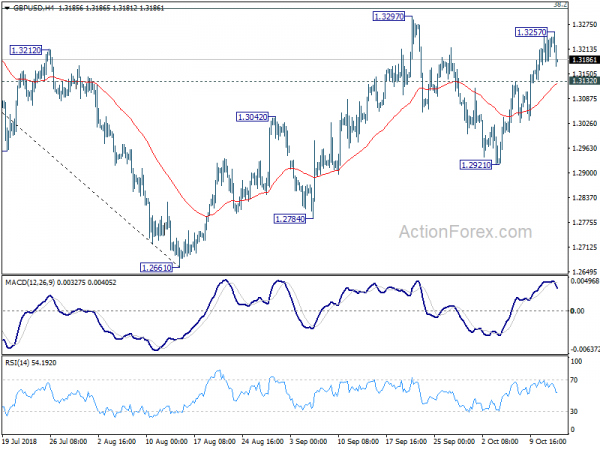 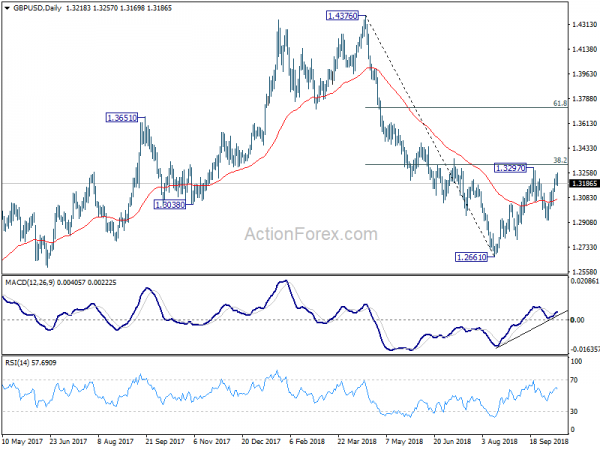