Sterling suffers steep selling today after the UK Government conceded that there will be no Brexit compromise with opposition Labour any time soon. Thus, UK is prepared to participate in European election on May 23. New Zealand Dollar pared back much of the post RBNZ rate cut spike losses. Though, it remains the second weakest for today.

Yen is at this point, the strongest one for today, but it’s really a tie with Euro and Swiss Franc. Risk aversion clearly dominates the markets on concerns over China trade war. Trump’s latest tweet indicates that he’s not going to back down with China and hailed that he’d be happy with over USD 100B a year in tariffs.

Technically, GBP/JPY’s strong break of 143.72 support aligns its outlook with USD/JPY and EUR/JPY. That is, recent rebound from 131.51 has completed and outlook is turned bearish that could eventually bring retest of this low. 1.2987 support is now an immediate focus in US session. Break will dampen original bullish view and put focus back to 1.2865 support.

Sterling’s decline picks up momentum earlier on news that the UK government conceded that they couldn’t finish Brexit negotiation with opposition labor soon. And hence, Cabinet Minister David Lidington confirmed European parliament elections will go ahead in UK on May 23.

Then there were even reports that the discussion between Prime Minister Theresa May and opposition leader Jeremy Corbyn was close to a collapse. Though, May told the parliament that the government is “indeed talking with the Labour Party”, and “we are working on agreement that can command the majority” of the Commons.

China backtracked on all aspects of trade commitments with US

According to a Reuters report, China has back tracked on nearly all aspects of their commitment in trade negotiation with the US. In each of the seven chapters of the 150-page draft trade deal, China deleted its comments regarding law changes that addresses US complaints. It’s seen by the US as undermining the “core architecture” of the trade deal. A private sector source said “China got greedy” and “on a dozen things, if not more.” And, China appears to be miscalculating with the US administration even after 20 years dealing with them.

Chinese Vice Premier Liu He will arrive in Washington of Thursday to save the trade agreement. At the same time, new round of tariffs will take effect at 0001 Friday, if no deal is agreed. There’s speculation that Liu could agree to scrap the latest proposed text changes and agree to making new laws. But at this point, it’s unsure what level of authority and constraints Liu has got from President Xi Jinping Thus, no one knows what results Liu could achieve.

Latest trade data from China showed that growth in exports in other regions in 2019 so far was merely enough to offset contraction of -9.7% ytd yoy in exports to US. Total export grew a mere 0.2% ytd yoy. On the other hand, total exports contracted -2.5% ytd yoy, as dragged down by -30.4% ytd yoy contraction in exports from US. Trade with EU remained relatively healthy.

RBNZ lowers official cash rate by -25bps to 1.50% as widely expected. In the accompanying statement, RBNZ noted that:

There was a “consensus” that lower path of OCR relative to February MPS was “appropriate”. That reflects “weaker domestic spending” and “projected ongoing growth and employment headwinds”. A key downside risk to growth was “larger than anticipated slowdown in global economic growth, particularly in China and Australia, New Zealand’s largest trading partners.”

In the latest economic projections, RBNZ projected that inflation will stay below target for longer then in February MPS. CPI won’t breaks 2% level until 2022. CPI forecasts for 2019 and 2021 were both revised down. On growth, RBNZ sees slower GDP growth in 2019 and 2020. But GDP growth is expected to pick up solidly in 2021 before dipping in 2022. On the net, RBNZ sees the need for further rate cut with average OCR hitting 1.4% in 2021 before bottoming.

Minutes of the March 14/15 BoJ meeting noted that members “concurred” that the economy will continue to its “moderate expansion”. “domestic demand was likely to follow an uptrend”, including fixed investment and private consumption. That should offset weakness in exports and product as dragged down by overseas slowdown.

On prices, members reiterated that CPI ‘continued to show relatively weak developments compared to the economic expansion and the labor market tightening.” But CPI is still “likely to increase gradually” toward 2% target.

On monetary policy, members agreed that it was “appropriate” to persistently continue with the powerful monetary easing under the current guideline. On member warned of the “side effects” of maintaining current easing. One member warned that if downside risks were materializing, BoJ should be prepared to make policy responses. One member also noted the importance to “preemptive policy responses” in case of phase shift in developments.

Also from Japan, monetary base rose 3.1% yoy in April versus expectation of 3.6% yoy.

GBP/USD’s fall from 1.3176 accelerates lower today and focus is now back on 1.2987 minor support. Firm break there will confirm that rebound from 1.2865 has completed at 1.3176 already. More importantly, this will revive that bearish case that rebound from 1.2391 has completed at 1.3381. And intraday bias will be turned to the downside for 1.2865 support for confirming bearishness. Nevertheless, on upside, above 1.3176 will target a retest on 1.3381 high next. 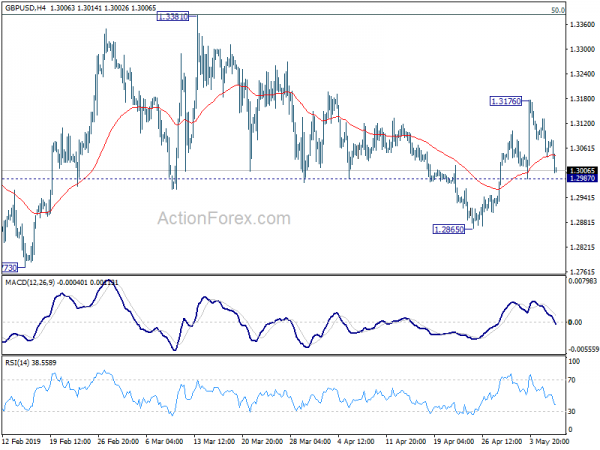 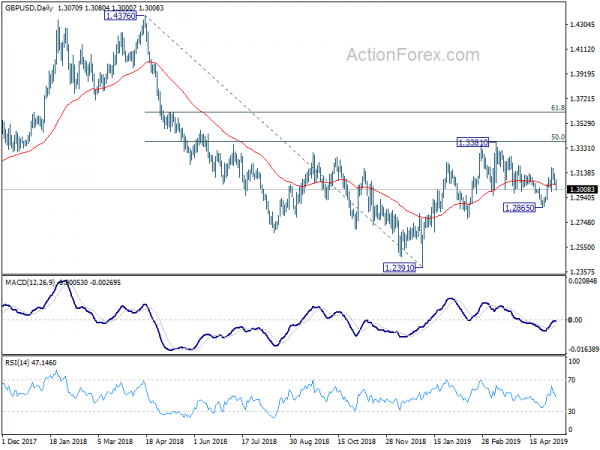