The financial markets are, generally speaking, a bit mixed today. European stocks are slightly in red while US futures are down. But losses are very limited. Bulls are still in overwhelming control. In the currency markets, Swiss Franc drops sharply as recent volatile trading continues. Dollar attempted for a rebound earlier today but quickly lost steam. Commodity currencies are engaging in consolidations, awaiting next move in the risk markets. 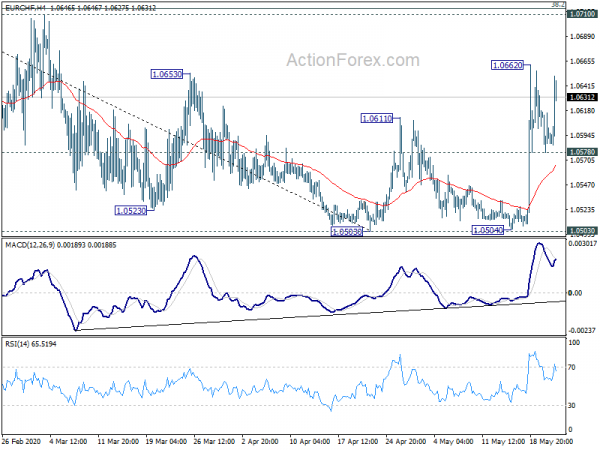 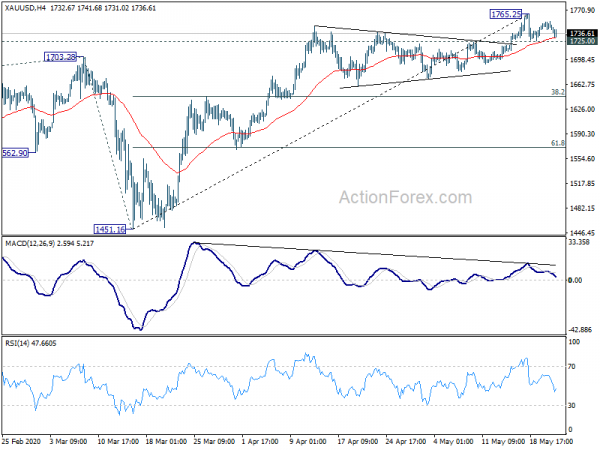 Philadelphia Fed Manufacturing Business Outlook rose to -43.1 in May, up from April’s 40-year low of -56.6. 58% of firms reported decreasing activity versus 15% which reported increase.

Chris Williamson, Chief Business Economist at IHS Markit, said: “The UK looks set to see a frustratingly slow recovery, given the likely slower pace of opening up the economy relative to other countries which have seen fewer COVID-19 cases. Virus related restrictions, widespread job insecurity and weak demand will be exacerbated by growing business uncertainty regarding Brexit. We are consequently expecting GDP to fall by almost 12% in 2020. While the quarterly rate of decline looks likely to peak at around 20% in the second quarter, the recovery will be measured in years not months.”

Chris Williamson, Chief Business Economist at IHS Markit said: “Second quarter GDP is still likely to fall at an unprecedented rate, down by around 10% compared to the first quarter, but the rise in the PMI adds to expectations that the downturn should continue to moderate as lockdown restrictions are further lifted heading into the summer.”

“An additional concern is that demand is likely to remain extremely weak for a prolonged period, putting further pressure on companies to make more aggressive job cuts as government job retention schemes expire. We therefore expect GDP to slump by almost 9% in 2020 and for a full recovery to take several years.”

RBA Governor Philip Lowe said together that “restoring confidence on the health front is a precondition for a strong recovery. “We might get a vaccine, we might get some anti-viral medication, but it’s also possible that we don’t. So we have an incredible lot riding on the work of the scientists.”

He added that the central bank was prepared to scale up the bond purchases if necessary. However, it was “extraordinarily unlikely to cut interest rates into negative.

Australia CBA PMI composite recovered to 26.4, May should mark the low point

CBA Head of Australian Economics, Gareth Aird said: “May should mark the low point in the PMIs and we would expect activity to lift from here on a monthly basis. Company views on the economic outlook have improved and the lift in confidence is welcome. That said, it will be a long time before activity returns to pre-COVID-19 levels. And deflationary pressures highlight the huge amount of slack we have now in the economy.”

RBNZ Ha: Won’t lower OCR until next March since banking system is not ready

New Zealand Dollar is trying to extend this week’s recovery as the chance of RBNZ negative rates is fading. RBNZ chief economist Yuong Ha said in a webinar that he didn’t expect interest rate to be lowered further from the current level of 0.25% this year.

“We expect to hold it there for the next 12 months, until March next year,” he said. “We’re not planning on taking it lower at this stage, simply because the banking system is not ready for lower OCR rates at the moment. We’ve given the banking system until the end of the year to get ready so that the option is there for the Monetary Policy Committee in a year’s time.”

Though, he also noted that the MPC has “the ability to continue to monitor, revise, reassess and re-evaluate our decisions and the effectiveness of our decisions and do whatever it takes to get us back to our medium-term objectives.”

Separately, Westpac also revised their forecast and expect RBNZ to cut OCR to -0.50% in April 2021, rather than November 2020. It said the timing of negative rate “would depend on how long it takes for trading banks to become operationally ready for a negative OCR”. As RBNZ has asked trading banks to ready themselves for negative OCR by December 1 this year, a negative OCT “will be operationally possible from the start of 2021.

Japan exports dropped most in a decade in April

Japan PMIs: Potential hit to Q2 could be as large as 20% on previous year

Joe Hayes, Economist at IHS Markit, said: “Plummeting demand for goods is finally catching up with manufacturing sector… Taking April and May data together, they’re indicative of GDP falling at an annual rate in excess of 10% and the economy is going to contract for a third straight quarter. Potential hit to Q2 could be as large as 20% on the previous year.” Also, “damage to the manufacturing sector could continue to worsen as global trade conditions deteriorate and the global economic recovery is slow”. 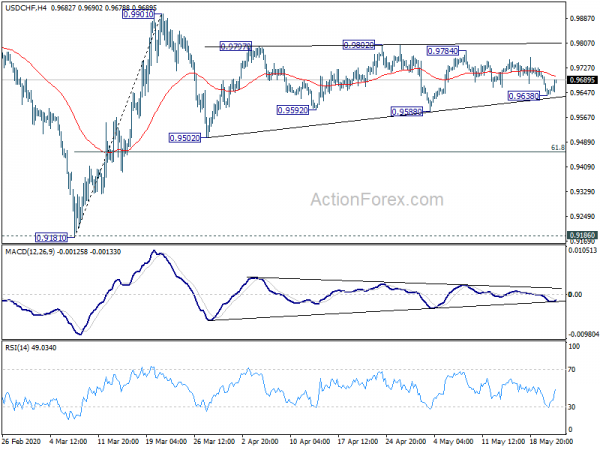 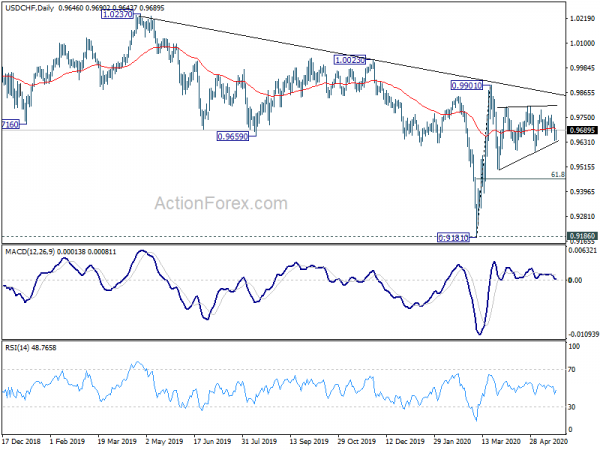