The market opened the month with mildly positive sentiment, with major Asian indexes trading higher. But there is little reaction in the currency markets. Commodity currencies are generally soft for now, with slight losses in particular in Kiwi and Loonie. On the other hand, Dollar, Yen and Euro are trading mildly higher. Overall, however, there are no big moves yet as traders are awaiting a very busy week ahead, with two central bank meetings, and lots of heavy weight data releases.

Technically, one key question is that whether Dollar would solidify last week’s decline into general near term bearish reversal. In particular, EUR/USD needs to break through 1.1907 temporary top to resume the rebound from 1.1751 low first. Then, follow through buying is needed to push the pair through 1.2 handle decisively. We’ll if that would happen.

Japan PMI Manufacturing was finalized at 53.0 in July, up from June’s 52.4. Markit said output and new orders rose at faster rates. There were sharp rise in cost burdens amid supply chain disruption. Businesses reported softer optimism regarding future output.

Usamah Bhatti, Economist at IHS Markit, said: “The Japanese manufacturing sector continued to see an improvement in operating conditions… the pace of expansion quickened as firms recorded stronger growth in both output and new orders… supply chain disruption continued to impact activity within the sector, with firms recording the second greatest deterioration in lead times in over a decade. Material shortages and logistical disruption contributed to a rapid rise in average cost burdens, as input prices rose at the fastest pace since September 2008.

China Caixin PMI manufacturing dropped to 50.3 in Jul, recovery not yet solid

China Caixin PMI Manufacturing dropped to 50.3 in July, down from 51.3, below expectation of 51.0. Caixin said output growth slowed amid slight drop in new orders. Staffing levels were broadly unchanged while inflationary pressures eased.

Wang Zhe, Senior Economist at Caixin Insight Group said: “China’s official second-quarter economic figures were in line with expectations, but the Caixin China manufacturing PMI in July and relevant data suggested the recovery of the economy is not yet solid. The economy is still facing huge downward pressure, and we need to ensure entrepreneurs’ confidence.”

RBA and BoE to meet, US to release ISMs and NFP

Two central banks will meet this week. Given recent surge in delta variants and accompanying lockdowns, RBA is generally expected to reverse it’s tapering decision made just a month ago. For the very least, it’s likely that asset purchases would continue at a weekly pace of AUD 5B starting September. There are also speculations that RBA could indeed raise the pace to AUD 6B to show it’s flexibility and commitment.

BoE is widely expected to keep monetary policy unchanged, even though some officials have openly voiced concerns about inflation. The MPC would instead wait and see how the economy cope with fiscal tightening, as government support schemes come to an end. Nevertheless, new quarterly economic projections would still trigger some volatility in the Pound.

On the data front, US ISMs and non-farm payrolls will take center stage. Also watched include Canada employment, New Zealand employment, and China PMIs. Here are some highlights for the week: 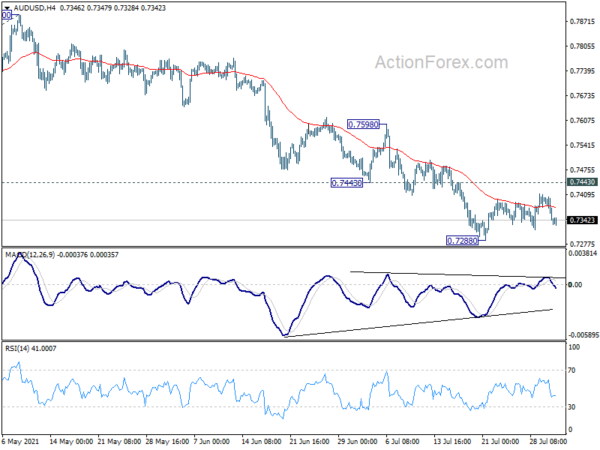 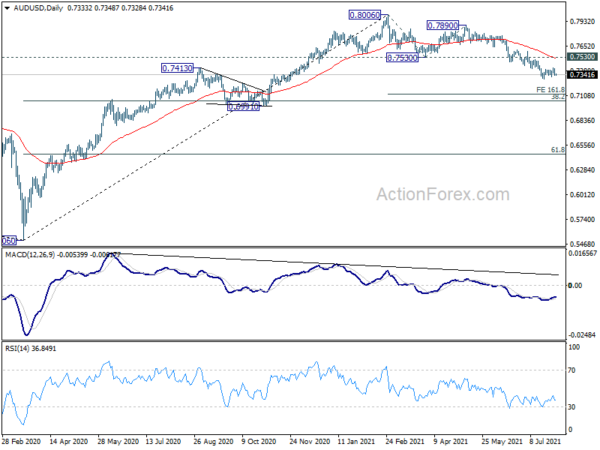