BoE Bailey: Negative rates were one of the potential tools under active review

The Sunday Times reported that BoE Governor Andrew Bailey has sent a letter to bankers telling them “negative rates were one of the potential tools under active review”. It’s one of the options if more stimulus was needed to lift inflation back to 2% target. And it would be a “significant operational undertaking for firms” as a year could be needed to alter computer systems and update contracts.

Additionally, it’s said that Bailey emphasized “every tool they have is on the table” at a meeting with bankers at the end of June.

ECB President Christine Lagarde said the coronavirus pandemic could accelerate the economy’s transformation towards further digitization and automation, with shorter supply chain. The transition to new economic model will be “disruptive”. “They will probably be more disruptive in the first two years, obviously hitting employment and production,” she added.

“So the inflation dynamic will necessarily be impacted, probably with a disinflationary, deflationary aspect at first, and then an inflation dynamic.” ECB will need to keep monetary policy exceptionally loose in the mean time.

She added that ECB estimated supply chain to shrink by around 35%, with use of robots increased by 70% to 75%.

The Bank of France Governor also said separately that things are going “at least as well as we forecast at the start of June, and even a bit better” in France. Economic contraction in 2020 may not be as sharp as the -10% projected. “If households have more confidence and dip into savings to feed their consumption, the recovery could be quicker and we could get to pre-covid levels of activity at the end of 2021,” Villeroy said. 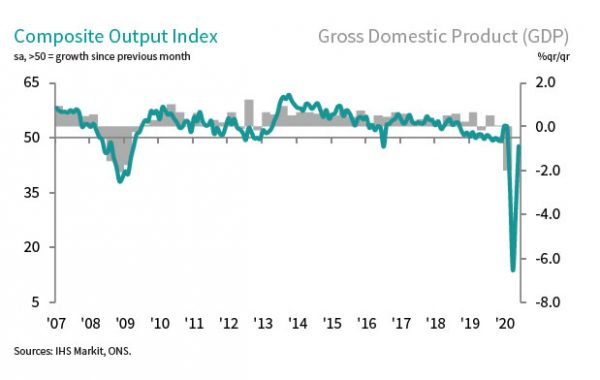 “June data highlights that the worst phase of the service sector downturn has passed as more businesses start to reopen and adapt their operations to meet social distancing requirements. The proportion of service providers reporting a drop in business activity has progressively eased after reaching a peak of 79% in April. Around 33% of the survey panel signalled a reduction in business activity during June, which compared with 54% in May.

“Encouragingly, more than one-in-four service providers reported an expansion of new business during June, which was commonly attributed to pent up demand and the phased restart of the UK economy. However, lockdown measures continued to hold back travel and leisure, while companies across all main categories of service activity commented on subdued underlying business and consumer spending in the wake of the COVID-19 pandemic.

“The latest UK Services PMI data highlighted another steep decline in employment numbers, despite a rebound in business expectations for the year ahead. Service providers widely commented on fears of a slow recovery in customer demand and an immediate need to reduce overheads. Moreover, survey respondents often noted the high cost of adapting operations during the COVID-19 pandemic, coupled with constrained business capacity and difficulties passing on rising expenses to clients.” 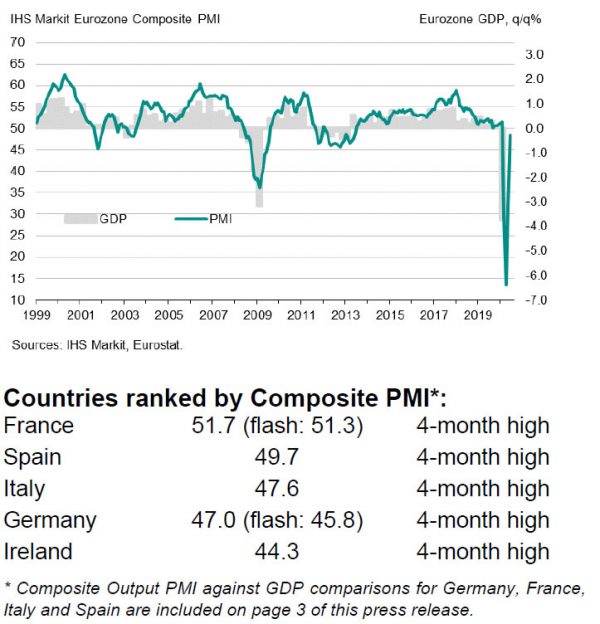 “The headline eurozone PMI surged some 17 points in June, a rise beaten over the survey’s 22-year history only by the 18-point gain seen in May. The upturn signals a remarkably swift turnaround in the eurozone economy’s plight amid the COVID-19 pandemic. Having sunk to an unprecedented low in April amid widespread business closures to fight the virus outbreak, the PMI has risen to a level indicative of GDP contracting at a quarterly rate of just 0.2%, suggestive of strong monthly GDP gains in both May and June. An improvement in business sentiment meanwhile adds to hopes that GDP growth will resume in the third quarter.

“However, despite the vigour of the return to work following COVID-19 business closures, we remain cautious as to the strength of any longer-term recovery after the immediate rebound. Companies continued to report weak underlying demand in June. Many remained risk averse, being reticent to commit to spending and hiring due to persistent uncertainty as to the economic outlook, and in particular the likely sustained weakness of demand for many goods and services due to the need to retain many social distancing measures. While confidence in the future has improved, it remains well below levels seen at the start of the year, reflecting how many businesses are far from back to normal.”

China Caixin PMI Services jumped to 58.4 in June, up from 55.0, beat expectation of 53.8. The rate of expectation was the quickest recorded since April 2010. The upturn was widely attributed to the recent easing of conronavirus related restrictions and stronger demand conditions. PMI Composite rose to 55.7, up from 54.5, strongest since November 2010. 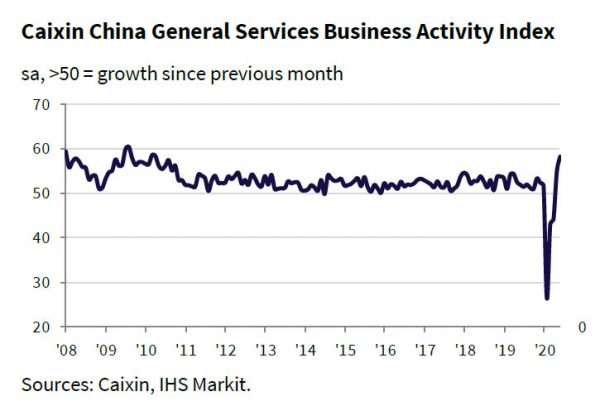 “Therefore, although businesses were optimistic about the economic outlook, they remained cautious about increasing hiring, with employment in both the manufacturing and services sectors shrinking. Addressing the employment problem requires not only macro policies to further promote work resumption, but also more targeted relief measures introduced by governments to tide companies over.”

UK Gfk Consumer Confidence rose to -27 in July’s flash reading, up from June’s -30. General Economic Situation over the next 12 months also improved to -42, up from -48.

“After the recent near-historic low of -36 for the Consumer Confidence Barometer last month, we’re seeing some early signs of improvement across most measures for our fourth COVID-19 flash, even though all our core scores remain negative… Economic headwinds could easily blow any recovery off-course with confidence remaining fragile and volatile amid few signs of stability.”. 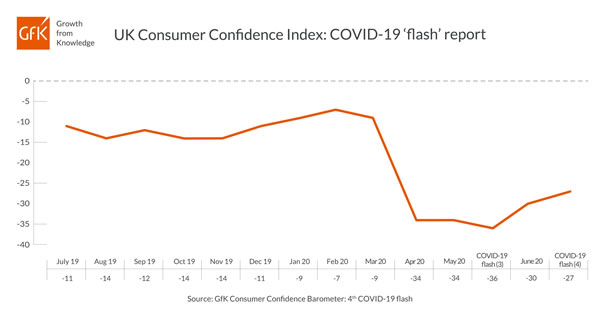 Australia retail sales rose 16.9% in May on lockdown easing

Australia retail sales rose 16.9% mom in May, revised up from preliminary reading of 16.3% mom. But that’s not enough to recovery the -17.7% mom decline back in April.

“The gradual easing of social distancing regulations, and the re-opening of physical stores, bolstered retail trade in May,” said Ben James, Director of Quarterly Economy Wide Surveys. “Retailers across a range of industries reported high numbers of consumers returning to stores, with some retailers noting levels similar to those seen in December.” 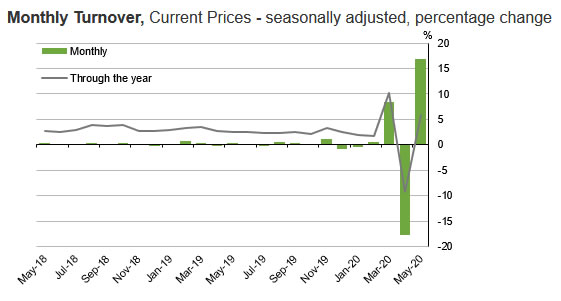 Australia AiG Performance of Construction Index rose to 35.5 in June, up from 24.9. The data indicates improvement in business conditions in the sector, with pace of contracted eased from the record lows experienced since March. In trend terms, all components improved but stayed below 50. IN particular, activity rose 13.7 pts to 35.1. New orders rose 9.8 pts to 32.8. Employment rose 11.3 pts to 40.4. 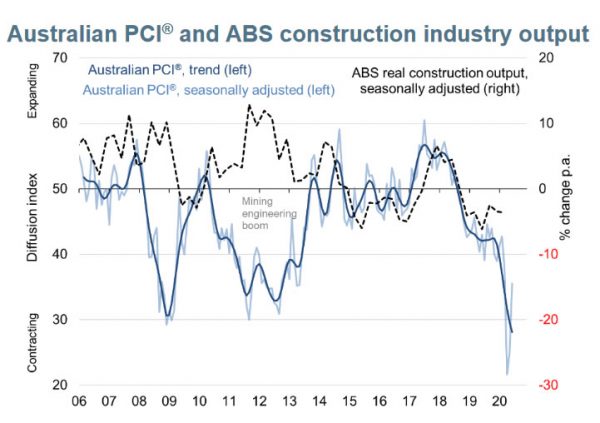 US initial jobless claims dropped to 1427k, continuing claims down to 19.3m 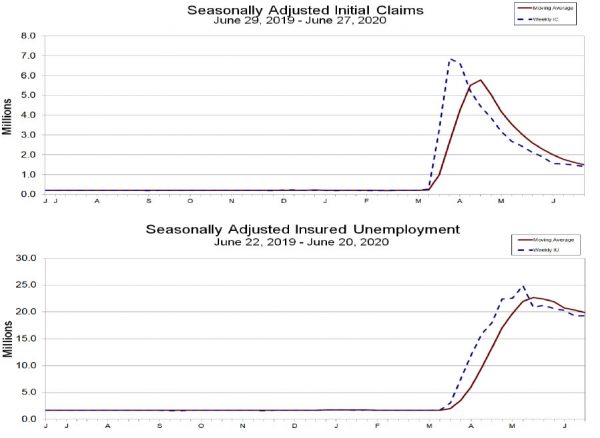 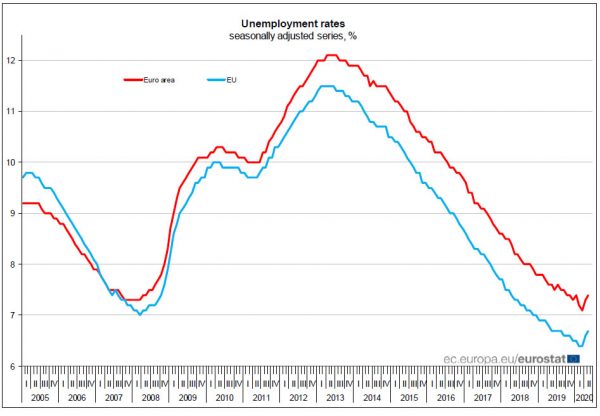 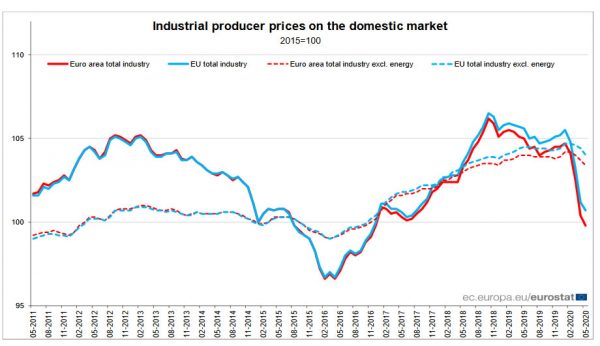 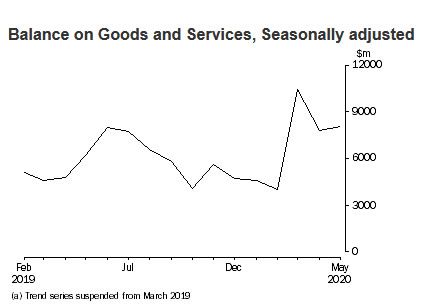 St. Louis Fed President James Bullard warned that the risk of a financial crisis remains. He said “without more granular risk management on the part of the health policy, we could get a wave of substantial bankruptcies and could feed into a financial crisis,”

Hence, “it’s probably prudent to keep our lending facilities in place for now, even though its true that liquidity has improved dramatically in financial markets.” The idea to is to make sure that markets don’t freeze up entirely in the twists and turns of a crisis.

US oil inventories dropped -7.2m barrels, WTI back below 40

WTI has little positive reaction to the sharp decline in inventories. XTI/USD dropped below 40 as a temporary top was formed at 40.41. Deeper decline might be seen back towards 36.87 support. In the bigger picture, recent rebound from March’s spike low appeared to have lost upside momentum, as seen in daily MACD, ahead of 42.05 key resistance. Break of 36.87 should confirm short term topping and bring deeper correction back to 34.36 support and possibly below. 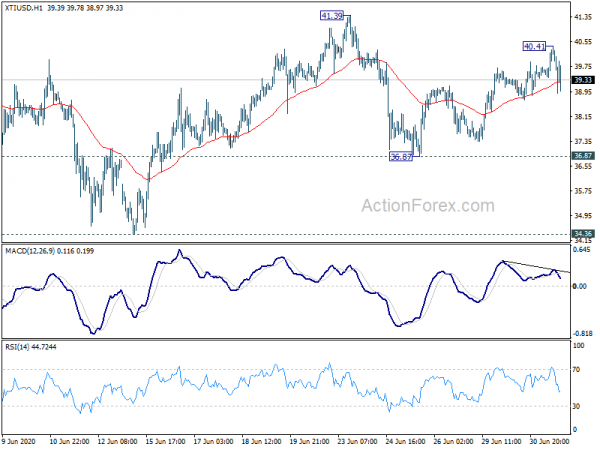 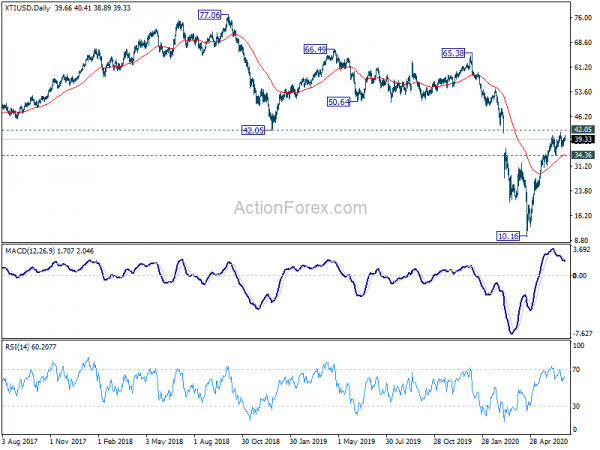 “As predicted, the growth cycle has returned after three straight months of COVID-19 disruptions. Demand, consumption and inputs are reaching parity and are positioned for a demand-driven expansion cycle as we enter the second half of the year, ” said Timothy Fiore, Chair of ISM Manufacturing Business Survey Committee: 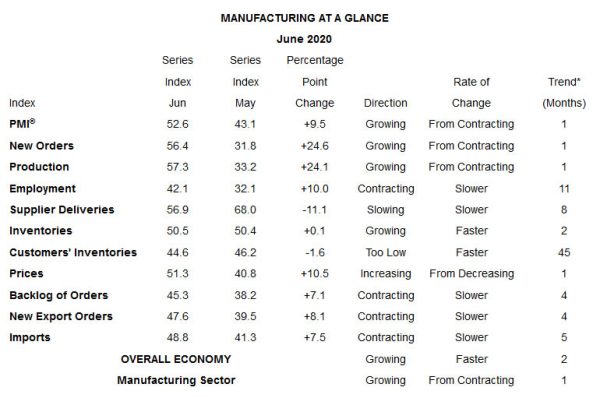 “Small business hiring picked up in the month of June,” said Ahu Yildirmaz, vice president and co-head of the ADP Research Institute. “As the economy slowly continues to recover, we are seeing a significant rebound in industries that once experienced the greatest job losses. In fact, 70 percent of the jobs added this month were in the leisure and hospitality, trade and construction industries.” 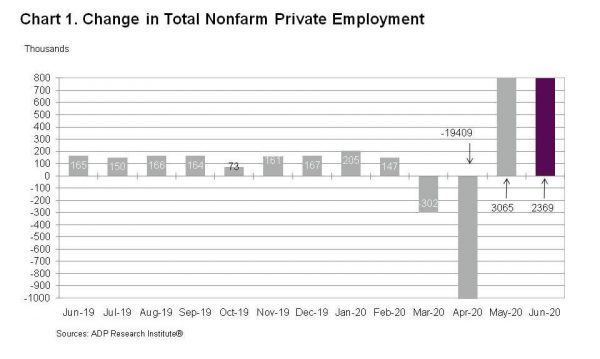 BoE policymaker  Jonathan Haskel said in a speech that “current stand of monetary policy is appropriate”. But, “on balance risks are to the downside”. He added that a second wave of coronavirus pandemic would be a “statement about public health”. BoE’s job would be to “respond to the prospective economic consequences”, depending on factors including fiscal reactions and other countries situations.

He also noted “worryingly the indicators of rising unemployment are already revealing themselves with unemployment claims recorded to date enough to put us back to levels of unemployment not seen since the financial crisis. Furthermore there remains a great deal of uncertainty as to how many of the currently furloughed workers will be able to return to their jobs, which in large part will depend on our success as a nation managing and suppressing the virus, and the state of household finances and consumers’ appetite for resumption of discretionary economic activity.

ECB Executive Board member Fabio Panetta said “the euro area has so far weathered the consequences of the shock about as well as could be expected.” “Positive indications need to be taken with a pinch of salt, since the high levels of prevailing uncertainty make it difficult to rely on past regularities.”

Separately, Vice President Luis de Guindos said the central bank is ready to adapt its policy to meet the needs of EU after the coronavirus pandemic. However, “the main antidote will not be monetary policy – which we will conduct, knowing that we are not omnipotent – but rather reforms and budgetary policy of single governments.” He added that the impact of the pandemic would have been more contained had EU been more integrated at economic and monetary levels.

UK PMI Manufacturing was finalized at 50.1 in June, up from May’s 40.7. The 9.4 pts month-on-month rise was the largest on record. But the headline reading indicates a stabilization only, not marked improvement. Also, employment fell for the fifth successive month. 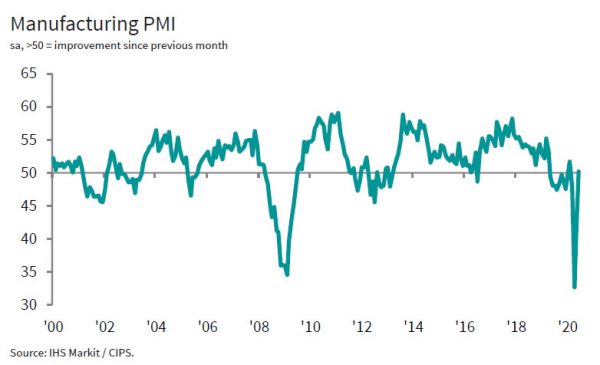 Rob Dobson, Director at IHS Markit: “June completed a marked turnaround in momentum in UK manufacturing… The planned loosening in COVID-19 restrictions on the 4th July should aid further gains in coming months. Although the trend in new export business remains weak, that should also strengthen as global lockdowns and transport constraints ease further.

“The main focus is now shifting towards the labour market. Concerns are rising about the potential for marked job losses, especially once the phase out of government support schemes begins. The news on that footing is less positive, with June seeing a further reduction in staffing levels and, although easing sharply since April’s record, the rate of job loss remains among the steepest in the 29-year survey history. Economic conditions will need to improve markedly across the UK, or some support retained, if the labour market downturn is to avoid becoming more entrenched through the remainder of the year.”