Swiss KOF Economic Barometer dropped to 94.4 in May, down from 96.2 and missed expectation of 96.2. The reading dived further below its long-term average. KOF noted “Swiss economy is developing rather sluggishly.” And, majority of sets of indicators are tending downwards.

The indicators for banking and insurance, consumption and foreign demand have developed negatively. The prospects for accommodation and food service activities and the other service providers have become gloomier. In the manufacturing sector, the outlook hardly changed compared to the previous month. For the construction sector, the outlook has improved.

BoE Deputy Governor Dave Ramsden said in case of a smooth Brexit with transition, the MPC expected UK growth to pick up, leading to excess demand and building domestic inflationary pressure. In such case, further monetary tightening is appropriate. Ramsden’s GDP growth expectation was “a little more pessimistic”. However, he also saw “downside risks to productivity, while he’s also “less optimistic on investment recovery”. Thus, his overall view on monetary policy was broadly in line with the MPC.

Ramsden noted that the “biggest risk to the UK economy and UK financial stability, remains that of a Brexit outcome of no deal and no transition.” But he emphasized that “most risks to financial stability that could arise have been mitigated”, even though “a no deal, no transition Brexit could still be expected to bring significant market volatility, as well as economic instability.” 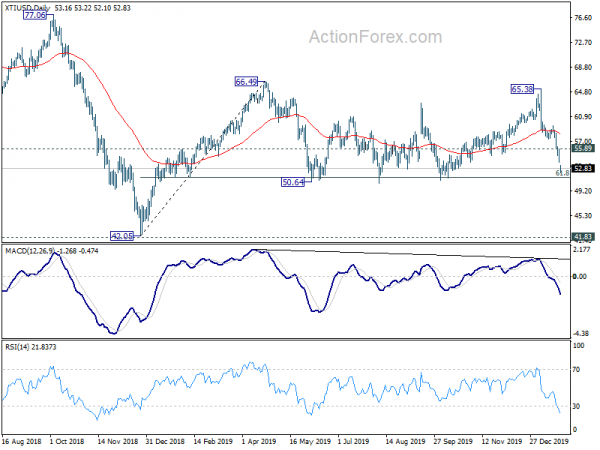 WTI crude oil drops sharply today as crude inventory unexpectedly rose 4.74M barrels in the week ending May 17, versus expectation of -1.2M barrels decline. Current development suggests that recovery from 60.03 has completed at 63.90 already. And the fall from 66.49 might be ready to resume. 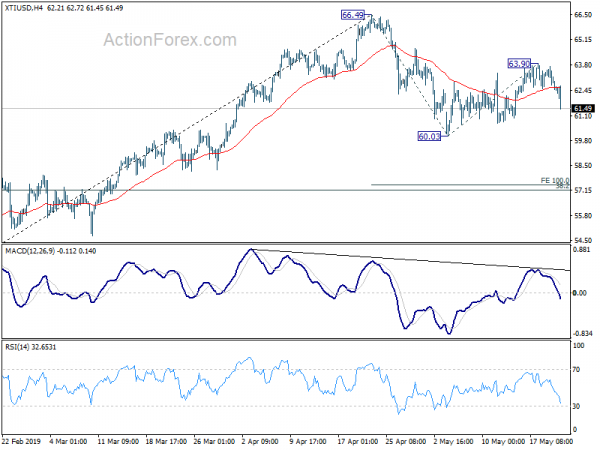 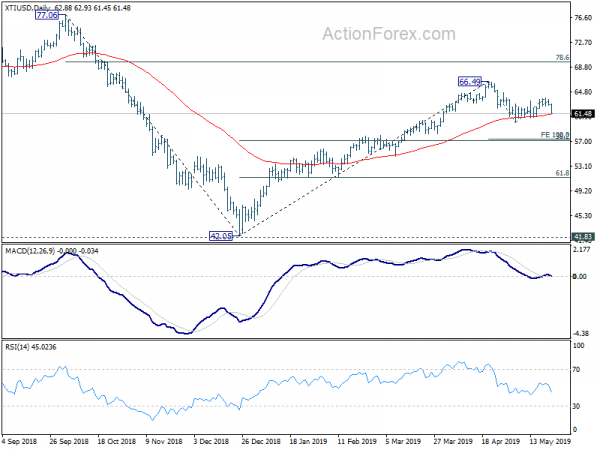 ISM non-manufacturing composite rose to 61.6 in September, up from 58.5 and beat expectation of 58.3. That’s also an all-time high since inception of the composite index in 2008. Employment index jumped notably by 5.7 to 62.4. ISM also noted in the release that “17 non-manufacturing industries reported growth” and, “respondents remain positive about business conditions and the current and future economy.”

The Australian Bureau of Statistics noted in the  release that “while the annual CPI rose 1.9 per cent, most East Coast cities have continued to experience annual inflation above 2.0 per cent, due in part to the strength in prices related to Housing and Food. Softer economic conditions in Darwin and Perth have resulted in annual inflation remaining subdued at 1.1 and 0.9 per cent respectively.”

AUD/USD spiked lower to 0.7576 after the release but quickly recovered. Firstly, the decline is a bit stretched after AUD/USD fell for three days. Secondly, the CPI data just affirmed the case that RBA is in no rush to raise interest rate. For now, AUD/USD is on track for 0.7500 key support level in near term. 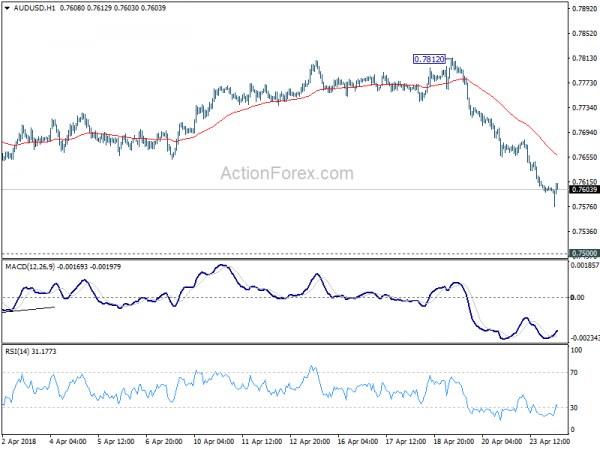 The Nikkei Review reported earlier this week that BoJ will likely lower inflation forecast at the upcoming quarterly Outlook for Economic Activity and Prices. The new projections will be published after July 30-31 meeting.

BoJ scrapped its “timeline” of hitting 2% inflation target around fiscal 2019, back in the April statement. But it’s been clarified multiple times by BoJ communications that the “timeline” was merely a projection, not a target.

Asian stocks tumble broadly today on concern of an outbreak of a coronavirus in China, as well as other countries in the region. China’s National Health Commission already confirmed that the virus which causes a type of pneumonia, can pass from person-to-person. That couldn’t come at the worst time as massive number of people are expected to travel within China before Lunar New Year.

According to a report by London Imperial College’s MRC Centre for Global Infectious Disease Analysis, it’s estimated that there were already over 1700 cases in Wuhan city by January 12. Such estimate was not commented by the Chinese authorities yet. But there were already cases reported by Thailand, Japan and South Korea, involving people from from Wuhan or who recently visited the city.

The virus is believed to be in the same family of Severe Acute Respiratory Syndrome (SARS), which killed nearly 800 people during an outbreak in 2003, starting in China and spread to Hong Kong. The World Health Organization (WHO) said yesterday that the primary source of the outbreak appeared to be an animal and some “limited human-to-human transmission” occurred between close contacts. WHO also called for an emergence committee on Wednesday to assess the situation.

Hong Kong HSI is gaps lower today and is currently down more than -2%. Technically, a short term top is formed at 29174.92 and deeper pull back could be seen. Initial support is expected at around 55 day EMA (now at 27708). Rebound from 24899.93 could still extend higher. However, sustained break of the EMA would turn outlook bearish and HSI could head back towards 24899.93 support in that case. 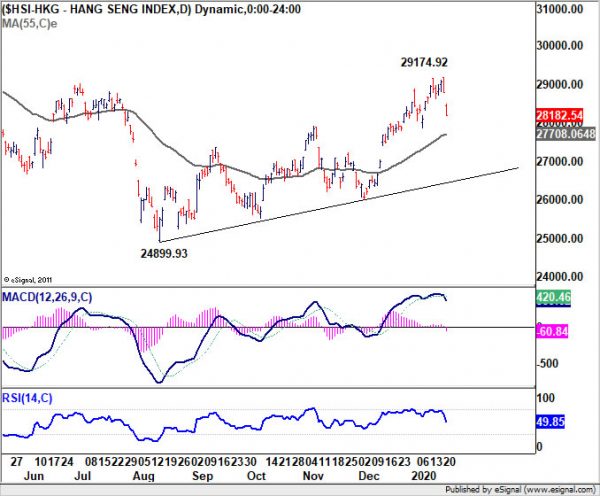 USD jumps ahead of US session, EUR/USD breaks yesterday’s low

Dollar rally picks up momentum again in enter into US session. In particular EUR/USD has now taken out yesterday’s low at 1.2181 to resume recent fall to 1.2154 support. 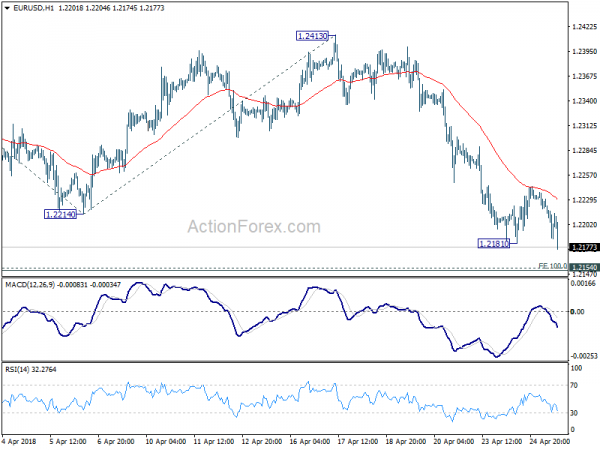 As seen in the D heat map, only GBP/USD’s is holding above yesterday’s low for now. NZD, AUD, CHF and CAD are trading as the weakest ones.

Let’s see how far USD can go in a day with no important economic data featured. 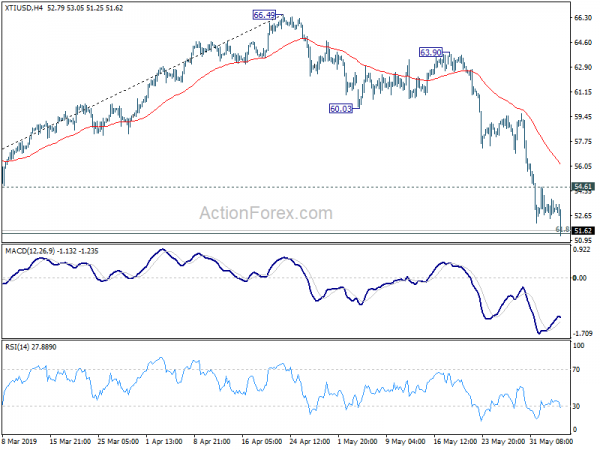 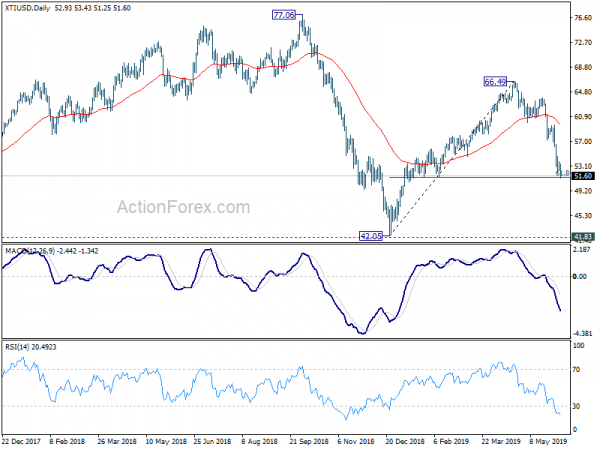 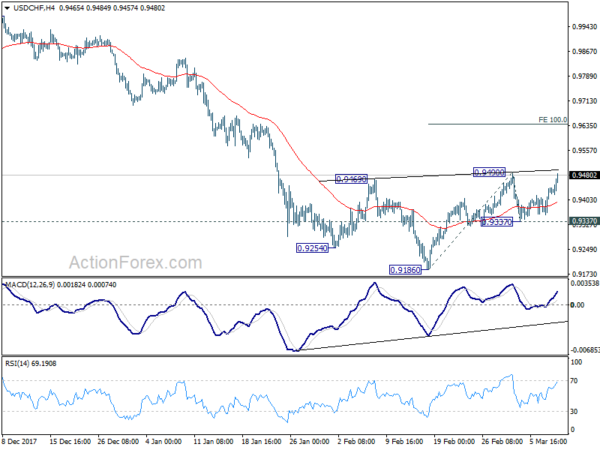 USTR proposes tariffs on additional USD 4B of EU products

Just days after agreeing to stop tariff escalation with China, US is now turning to EU. The US Trade Representative proposed tariffs on additional EU imports, as countermeasures to harm caused by EU aircraft subsidies. A “supplemental list” of 89 subheadings with approximate trade value of USD 4B was proposed. The list includes olives, Italian cheese and Scotch whiskey, etc.

That’s additional to the USD 21B in EU imports published on April 12. A hearing will be held on the proposed additional products on August 5. But US could immediately impose increased duties on the products included in the initial list, if the WTO arbitrator issues a decision before the public comment period ends.

Eurozone (EA19) unemployment rate was unchanged at 8.5% in March, staying at the lowest level since December 2008.

EU28 unemployment rate was unchanged at 7.1%, staying at lowest level since September 2008.

US initial jobless claims rose 2k to 205k in the week ending February 8, better than expectation of 210k. Four-week moving average of initial claims was unchanged at 212k. 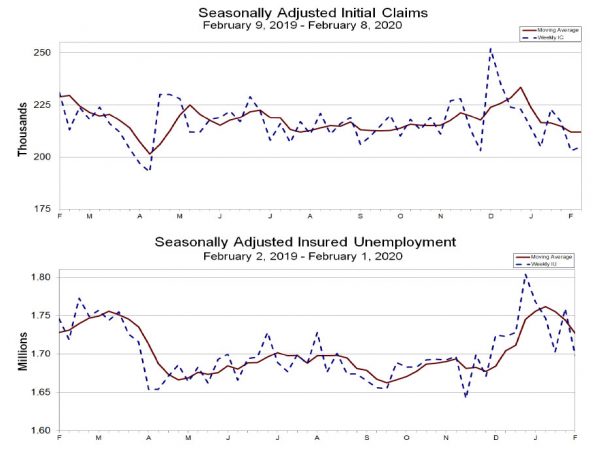 RBA chief economist Alan Oster noted that the “change reflects the fact there is no sign yet of stronger wages growth and unemployment has been stuck around 5.5% for the best part of a year.” Also, he added that once the tightening cycle starts “further rate increases will be very gradual”. And after the first move in May 2019, the next move will be “not until November 2019”.

Sentix noted that after the supposed de-escalation signals in US-China trade war at G20, there was “great hope that the downward trend in the economy could be stopped”. But, investors are “not blinded by the rising share prices” as expectations show no upward reaction to the news. It warned, “without resilient negotiation results, it will be difficult for investors worldwide to develop a different perspective.”

Sentix said “things are even worse for the German economy”. “The high dependence on exports and the Chinese sales market is increasingly becoming a burden and the customs dispute hovers like a sword of Damocles over the former model boy of the Euro region.” Also, the automotive industry is “simply not emerging from the crisis”.

Lagarde approved by European Parliament as next ECB President

European Parliament approved appointment of IMF managing director Christine Lagarde as next ECB president. The motion was voted for by 394 to 206, with 49 abstentions. Lagarde should take over the job from Mario Draghi from November 1.

Luxemburger Yves Mersch was also voted by the parliament to become the next Vice President of the supervision arm, by 379 to 230 votes, with 69 abstentions.

Both CAD and USD seem to be lifted by news regarding NAFTA as American traders get up in the morning. Bloomberg reported, citing unnamed sources, that Trump is pushing for a preliminary NAFTA deal to be announced next week. That would likely happen at the Summit of the Americas in Peru on April 13.

For now the story is not verified by other media yet. But it’s believed that Mexican Economy Minister Ildefonso Guajardo will meet with US Trade Representative Robert Lighthizer on Wednesday. Canadian Foreign Minister Chrystia Freeland will also meet Lighthizer on Thursday. White House trade advisor Peter Navarro also said on Monday that it’s realistic to wrap up NAFTA in two weeks.

In any case, we’ll likely have something more concrete in the coming days.

NZD and AUD are trading among the strongest ones today, with the help of recovery in US stocks. While DOW did suffer at initial trading, there ain’t no crash. CAD, however doesn’t share the same fortune as markets are back in concern over NAFTA renegotiation. CHF follows as the second weakest one.

A quick glance at the action bias tables for each currency reveals that CHF is trading with rather broad based downside bias.

GBP/CHF is a clear example with upside Action Bias across time frames. The patterns suggests that it has just finished a near term consolidation and is ready for further rally. 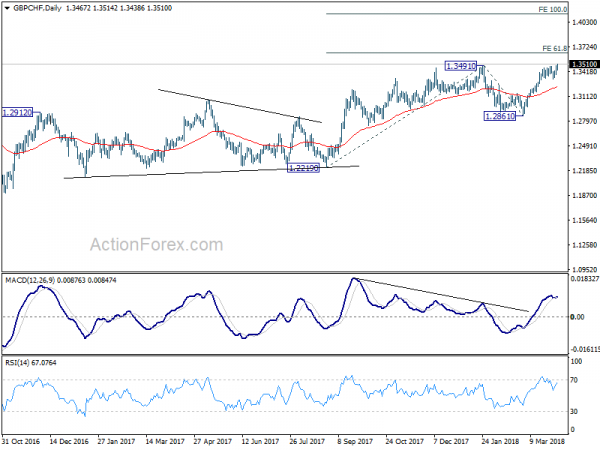