After a lacklustre couple of weeks for foreign exchange markets, trading volumes are expected to return to somewhat more normal levels over the next seven days with plenty of risk events on the horizon. But with many European markets shut on Wednesday for Labour Day and Japan closed for the entire week, liquidity might still be in short supply. The US currency and economy will remain at the fore as the Federal Reserve holds a policy meeting and the all-important jobs report is released. The euro and the pound will also be in focus as the initial GDP reading for the first quarter will be available for the Eurozone, while in the UK, the Bank of England will also be meeting to set policy.

Aussie to seek support from Chinese PMIs after bruising week

The Australian dollar looks set to end the week as the worst performing major currency following much weaker-than-expected inflation figures out of Australia. Improving economic indicators from China and the United States have not eased rate cut bets for the Reserve Bank of Australia as stubbornly low inflation could still prompt the central bank to reduce borrowing costs. There could be some support, though, for the aussie next week if the latest manufacturing PMIs from China confirm that the sector is emerging from a rut.

In March, both the official and Caixin/Markit manufacturing PMIs unexpectedly returned to growth, raising hopes that a recovery is underway. However, investors should wait before counting their chickens as the official manufacturing gauge (Tuesday) is predicted to stay unchanged at 50.5 in April, while the Caixin PMI (Thursday) is forecast to edge only marginally higher to 50.9. 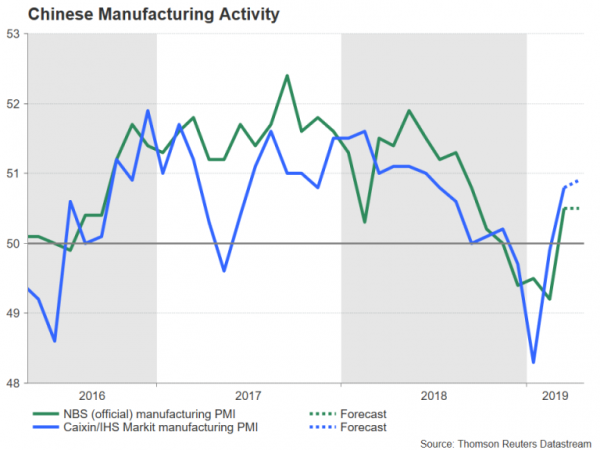 There will also be some domestic data for aussie traders to watch. Private sector lending numbers for March are due on Tuesday and building approvals for the same month will follow on Friday.

Kiwi feeling the heat too

Another underperformer this week has been the New Zealand dollar, which has also been engulfed by rate cut speculation. But unlike for its aussie cousin, the kiwi’s declines may be better justified as the Reserve Bank of New Zealand is more likely to cut interest rates than the RBA, which, so far has been more cautious.

Labour market figures due on Wednesday could be key for the RBNZ’s next move as the central bank now has a dual mandate to achieve low inflation as well as maximum sustainable employment. First quarter numbers on jobs growth, the unemployment rate and labour costs will be watched closely. The jobless rate had unexpectedly jumped to 4.3% in Q4 2018 so another increase would only fuel rate cut bets. 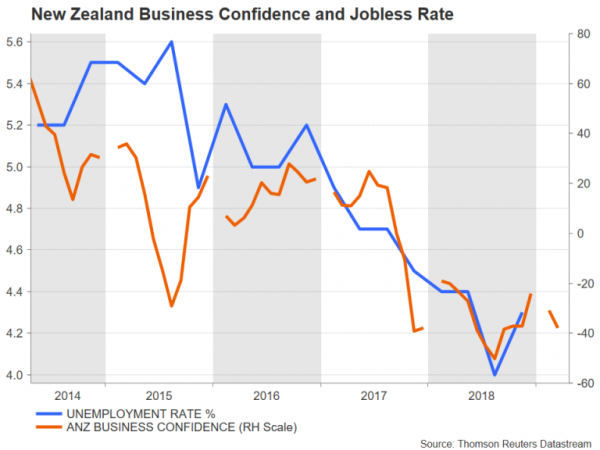 Also significant in New Zealand next week will be the ANZ business outlook survey for April on Tuesday. Weak business sentiment has been a major concern of the RBNZ as it contradicts the actual data, which hasn’t been quite as dismal. The bank is worried that persistently low business confidence would eventually drag on economic growth because it tends to hold back corporate investment.

After this week’s Bank of Canada meeting, which saw the bank dropping its tightening bias, attention will turn to Tuesday’s monthly GDP estimates. The Canadian dollar tumbled on the BoC’s statement and not even a bullish oil market could prevent the loonie from hitting near 4-month lows. There could be more downside for the loonie if GDP growth slows in February from January’s surprisingly strong 0.3% month-on-month rate. Slower growth would support the BoC’s shift to a neutral stance.

The Eurozone will report its preliminary estimate of GDP growth on Tuesday, but the data is unlikely to follow the same trend as in the US and China where economic pointers have been improving. The euro area economy is projected to have expanded by 0.1% quarter-on-quarter in the first three months of 2019 compared to 0.2% in the prior quarter. A worse figure such as no growth during the period would deepen the pessimism for the Eurozone economy. Ahead of the GDP numbers, a more forward-looking barometer – the economic sentiment indicator – will be monitored on Monday for signs that the downturn began to ease in April. 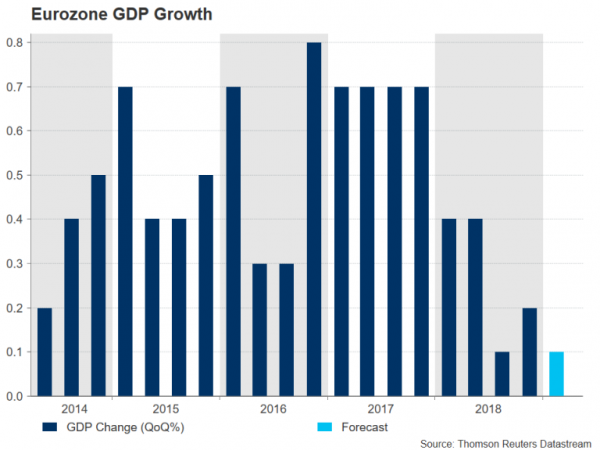 In other data, the flash inflation reading for April will be released on Friday, along with March producer prices. A combination of disappointing GDP and inflation prints would be the worst outcome for the euro, which crumbled below its key support around $1.1180 this week.

Bank of England to hold rates amid Brexit impasse

The ongoing Brexit deadlock has tied the Bank of England’s hands and policymakers are almost certain to keep rates unchanged at 0.75% on Thursday when they conclude a two-day policy meeting. However, the May meeting should nonetheless capture some attention as the bank will publish its quarterly inflation report, which includes the latest economic projections. There will also be a press conference by Governor Mark Carney, who is expected to repeat his warnings about the damage to the British economy from the lingering Brexit uncertainty.

The pound is unlikely to see a big reaction to the BoE decision but any dovish tilt either in the bank’s outlook or in Carney’s remarks could weigh on sterling, which slipped to 10-week lows versus the US dollar this week.

The UK economy has been relatively resilient, despite the Brexit chaos, with the hard data not quite as bad as the more recent gloomy PMI readings. The UK services PMI plunged below 50 in March, pointing to shrinking activity in the economy’s largest segment. The construction PMI is also below 50, with only the manufacturing sector expanding in March, though this was on the back of stockpiling by companies on fears of a hard Brexit. The April PMIs for manufacturing, construction and services will be released on Wednesday, Thursday and Friday, respectively. 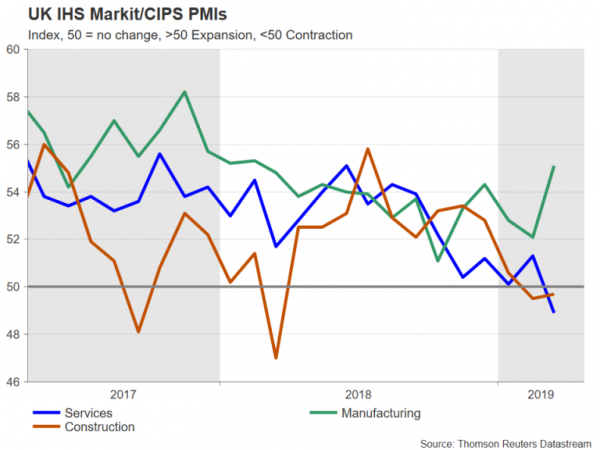 More weak PMI prints would not do the beleaguered pound any favours, but of course, Brexit is still very much the main driver for the British currency. Talks between the government and the opposition Labour party to find a consensus on a way forward with Brexit are reportedly not making much progress and, at the same time, pressure is building on the prime minister, Theresa May, to resign. Hence, the pound will continue to be sensitive to political headlines.

The US dollar has more than recovered from its January lows when the Fed hit the pause button to climb to the highest in 23 months against a basket of currencies this week. The latest indicators from the US suggest the ‘Goldilocks’ economy is back, with growth picking up some pace and inflation staying low. The core PCE price index (the Fed’s preferred inflation measure) that’s due on Monday will likely underscore the muted inflation picture as it’s expected to have moderated slightly from 1.8% year-on-year in February to 1.7% in March. Also out on Monday are personal income and spending figures. Both are forecast to have accelerated in March.

On Tuesday, there will be more important releases, including wage growth numbers for the first quarter, the Chicago PMI and the consumer confidence index for April, as well as pending home sales for March. The ISM manufacturing PMI for April will be closely watched on Wednesday following the unexpected rebound in March, but the main highlight will be the FOMC meeting. The Fed is widely anticipated to keep its benchmark rate on hold and will probably stick to recent language in its statement.

Fed chief, Jerome Powell, will no doubt attempt to reiterate the central bank’s ‘patient’ stance in his press conference even as the US economy regains some momentum. The greenback could come under some selling pressure if Powell appears unfazed by the recent bounce in growth but would likely recoup any losses if next week’s data are on the whole solid, particularly Friday’s jobs report. 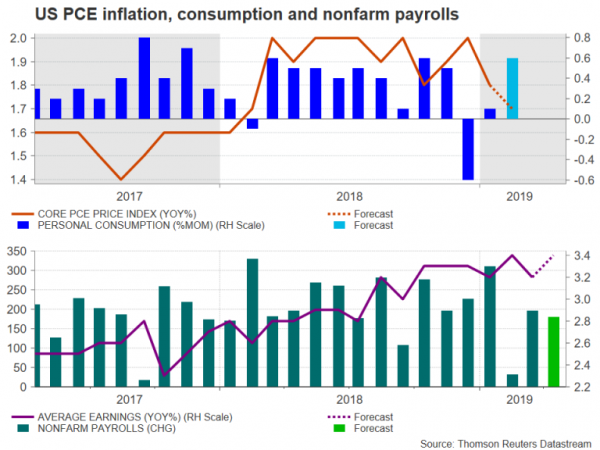 Nonfarm payrolls are forecast to have risen by 180k in April, easing slightly from the prior month. The unemployment rate is expected to have stayed unchanged at 3.8%, while average hourly earnings are forecast to head back up to 3.4% y/y from 3.2% in March.