Central banks in Australia and Canada will hold policy meetings next week – the first since the outbreak of the coronavirus escalated into a global crisis. But with policymakers having limited firepower, they will probably maintain a wait-and-see approach until a clearer picture starts emerging about the impact of the virus, whose spread has multiplied several-fold in the past week. Investors will also be waiting anxiously for the latest nonfarm payrolls report out of the United States as they push up their bets that the Federal Reserve will be compelled to slash interest rates soon. OPEC+ will come under the spotlight too as it meets to decide if there is a need for additional output cuts.

It will be a crucial week for the Australian dollar as a slew of important data releases and a policy meeting by the Reserve Bank of Australia will help investors gauge the likelihood of a near term rate cut. Australia’s economy had lost steam even before the virus outbreak and judging by the business spending numbers released this week, the lacklustre growth probably persisted in the fourth quarter.

The full Q4 GDP estimate is out on Wednesday and in the run up to that, business inventories and net exports contribution for the quarter will be watched on Monday and Tuesday, respectively. Later in the week, January trade (Thursday) and retail sales (Friday) data should also attract some attention. 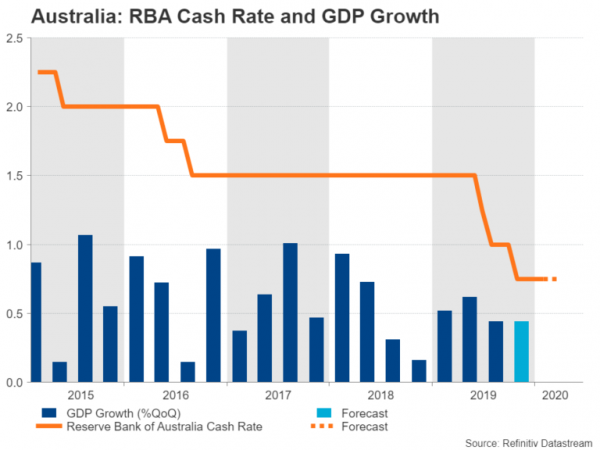 However, what traders will be more eager to know is whether or not recent developments have prompted a shift in policy stance at the RBA, which meets on Tuesday for its rate setting decision. Although the Bank is not anticipated to make any changes to its cash rate at the March meeting, any sign that it’s tilting towards a distinctly more dovish viewpoint could induce fresh selling pressure for the aussie. However, having already plummeted to 11-year lows, the oversold aussie could easily reverse higher if hints of policy easing help lift the market mood.

A day after the RBA meeting, it will be the turn of the Bank of Canada to set interest rates. BoC rate cut expectations have been on the rise since the coronavirus started spreading uncontrollably and markets have now priced cuts of almost 75-basis points in the overnight rate by year end. That may look excessive considering that Canada’s economy isn’t doing too badly and inflation is running above the 2% target midpoint.

However, under the surface, there are several trouble spots: exports are struggling, consumer spending is soft and anti-pipeline protests on a busy railway route have been causing huge disruptions to freight traffic during February. When adding to that the potential impact from the virus on the current and upcoming quarters, plus the fact that growth already slowed markedly in the second half of 2019, Stephen Poloz & Co may decide waiting would be riskier than slashing rates immediately and announce a surprise reduction next week.

But if Poloz still feels that the economy is “in a pretty good place” and the BoC stands pat in March, the odds are very high that it would cut in April. No action on Wednesday would also put greater weight to Friday’s employment report for February. 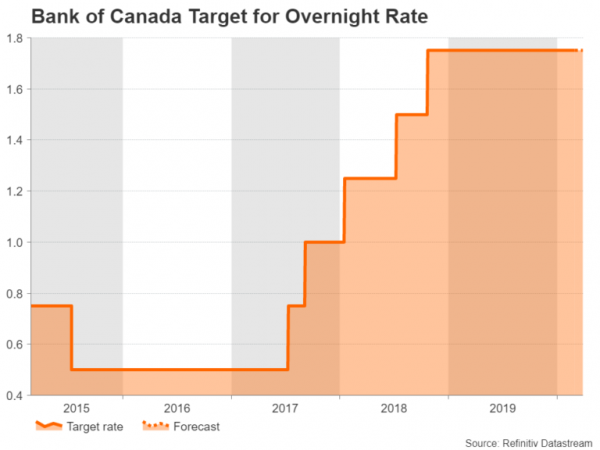 However, as far as the Canadian dollar is concerned, unless the BoC is unexpectedly upbeat, it will be difficult for the currency to stem its slide versus the US dollar.

One indicator policymakers as well as traders will definitely be watching to understand the scale of the damage of the coronavirus on China’s economy is the official manufacturing PMI due on Saturday. Forecasts are for the PMI to drop from 50.0 to 46.0 in February. If markets wake up to a worse-than-expected figure on Monday – which is a strong possibility given that much of the economy has been paralysed by the lockdown – the risk-off mood is likely to deepen. Later on Monday, the Caixin manufacturing PMI will be published and it will be interesting to see whether the private survey is in line with the government one. 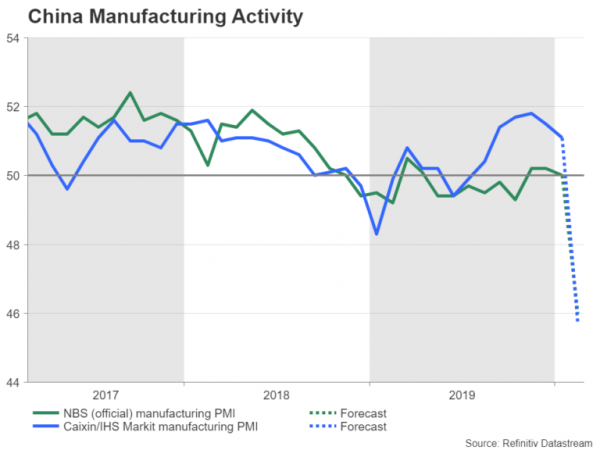 Japan’s economy was ravaged by the sales tax hike, a typhoon and the trade war in Q4 last year, causing GDP to shrink by 1.6% quarter-on-quarter. However, while the higher sales tax may have been the main culprit in keeping shoppers at home, the strong consumption enjoyed earlier in the year was not sustainable to begin with as wages had been falling for much of 2019.

Wage growth and household spending stats for January are due on Friday and any pickup at the start of 2020 would provide some hope to policymakers that the economy wasn’t in such dire straits before being struck by the virus outbreak in February. Ahead of Friday’s numbers, Q4 capital expenditure data will be monitored for any possible revisions to the dismal preliminary GDP readings.

Any positives in next week’s figures might further help the yen to restore its safe-haven status after the February wobble. On the whole, though, the yen’s brief tumble appears to have been triggered by one-off flows and risk sentiment and dollar moves will likely continue to be the main drivers for the Japanese currency in the coming weeks.

Euro perks up, for all the wrong reasons

The euro is enjoying a rare rally against the dollar as Fed rate cut expectations and unwinding of carry trades bolster the single currency. Short covering could also be aiding this recovery, which can only indicate that traders have not changed their gloomy outlook for the euro area. 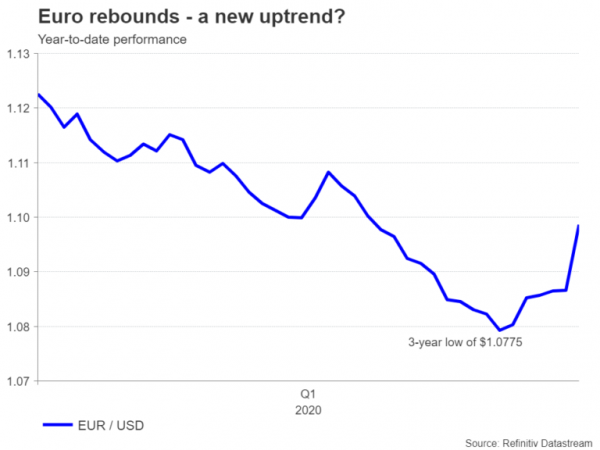 Data coming up next week is not anticipated to change the narrative for the Eurozone economy and any disappointing readings may temporarily put the brakes on the euro’s ascent. Kicking off the releases are German export numbers for January on Monday along with the final IHS Markit manufacturing PMI. The Eurozone’s flash inflation print for February is out on Tuesday and the final services PMI will follow on Wednesday. German industrial orders for January will round up the week on Friday.

Pound on the backfoot ahead of Brexit talks

The British pound has been unable to capitalize on the dollar’s pullback as ‘hard Brexit’ fears have unnerved investors after both the UK and the EU set out tough negotiating positions for future trade talks. UK PM Boris Johnson went a step further and warned he could walk away from the talks in June if by then the broad outline of a deal does not conform to that of a Canada-style agreement. That put the pound in a tailspin, sending cable below the $1.29 level.

With negotiations due to formally start on March 3, Brexit headlines are likely to be the main driver for sterling over the coming days as it will be extremely quiet on the data front apart from the final UK PMI readings.

ISM PMIs and jobs report eyed in the US

After February’s unexpectedly weak flash PMIs by IHS Markit, investors will be dissecting key data out of the US next week for any signs that growth in the world’s largest economy may have already started to falter from the impact of the virus epidemic. 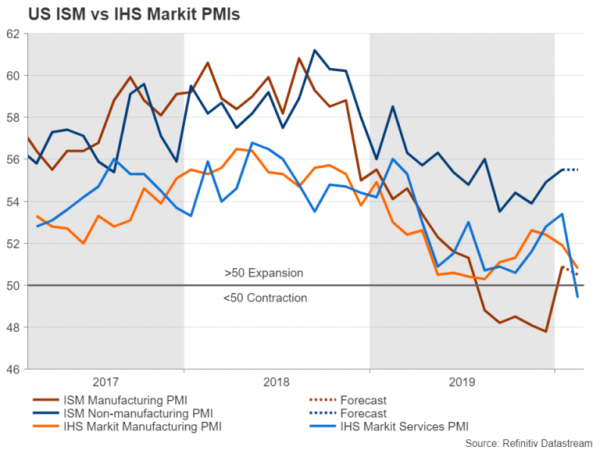 First on the radar is the ISM manufacturing PMI on Monday. The index is expected to decline slightly to 50.5 in February to hold just above expansionary territory. More crucially, the ISM’s non-manufacturing gauge that includes the vast services sector is forecast to stay unchanged at 55.5 when released on Wednesday in a massive contrast to IHS Markit’s print of 49.4, which pointed to a contraction in the sector. January factory orders are out on Thursday before attention turns to the all-important nonfarm payrolls report on Friday.

After a solid gain of 225k jobs in January, the US economy is projected to have added 178k jobs in February. This would represent a notable slowdown but nothing worrying just yet about the labour market. Average hourly earnings are forecast to have risen by 3.2% year-on-year, while the jobless rate is predicted to hold at 3.6%. 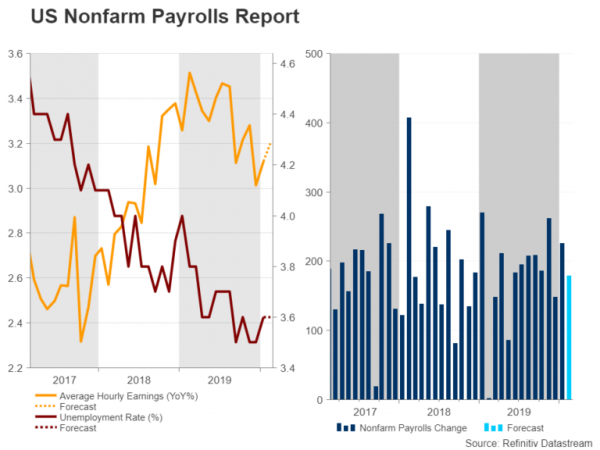 If the US indicators don’t stray too far from the forecasts, there could be some paring back of Fed rate cut expectations, which have soared over the last week as traders price in a high risk of a global recession. Markets now see the Fed lowering rates at least three times this year as the disruptions from the virus outbreak bring economic activity around the world to a standstill.

The US dollar, which only last week hit 3-year highs, made a dramatic reversal to the downside as recession fears intensified. But if next week’s numbers go some way in calming those fears, the greenback could in line for a bit of a rebound.

OPEC and its allies (known as OPEC+) will hold a scheduled meeting on Thursday and Friday and are likely to agree to additional output cuts as the demand outlook for oil continues to deteriorate in the face of a long-term impact on the global economy from the coronavirus. But there are doubts as to whether the alliance will be able to agree to lower production caps as key member Russia does not appear to have yet come around to the idea even as oil prices slump to more than one-year lows.

Russia had rebuffed attempts to hold an emergency meeting earlier in February and its refusal to back new output reductions could force Saudi Arabia to go it alone, with some other Arab nations possibly joining it. The lack of unity among the major producers does not bode well for oil so anything less than the recommended cut of 600,000 bpd will not do much in boosting prices.